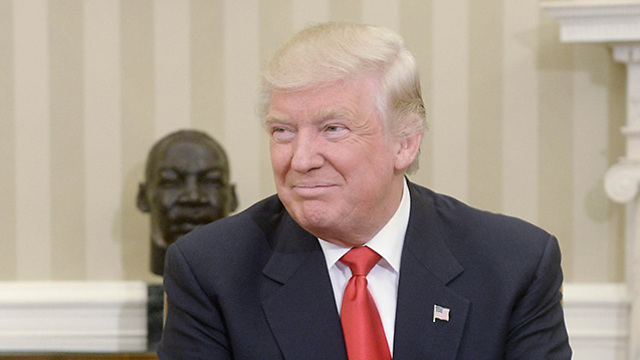 A confidential report by the Israel Foreign Ministry assesses Trump's international policy, particularly in the Middle East; 'Trump doesn't see the Middle East as a wise investment, and it is likely that he will strive to reduce US involvement in the region.'

The Foreign Ministry is preparing for Trump's accession to the White House by attempting to assess future US policy and how it will affect the international arena, particularly the Middle East.

A confidential report by the ministry's research department, which is responsible for formulating the ministry's intelligence assessment, states that "Trump doesn't see the Middle East as a 'wise investment,' and it is likely that he will strive to reduce US involvement in the region."

The report provides initial insights following the Trump victory. The document's central message is that Trump's statements indicate his desire to focus on internal challenges, while simultaneously strengthening the international position of the United States. However, the report indicates that, in practice, Trump's statements point to isolationist characteristics.

The report puts special emphasis on Trump's statements of support for Israel during the campaign. However, this issue is also marked by contradictory statements. On one hand, he declared that Israel has to pay for the military assistance it receives from the United States, but on the other hand, he views military aid to Israel as "a great investment."

In a policy statement published by Trump advisors on Israel-related matters, the aid agreement is viewed positively because the agreement does not prevent the government or congress from extending the aid beyond the amount specified.

According to the report, the peace process between Israel and the Palestinians is a top priority for the Trump government. The report further contends that his statements on the issue are not necessarily indicative of systemic policy. Trump has expressed support for moving the American embassy to Jerusalem and supports the right of Israel to build settlements. Other statements indicate that Trump will be an honest broker on the issue and that he believes all parties need to form a "deal" between them.

In terms of the Iran nuclear deal, the report notes that Trump has also made contradictory statements about his commitments. On one hand, he has strongly criticized the deal, but on the other hand, has avoided saying he will cancel the agreement and has promised to enforce strict monitoring of conditions.

In regards to the war on Syria, Foreign Ministry officials wrote that Trump declared completely different policies and has said there is a need to examine the provision of providing aid to rebels in Syria, and implicitly expressed support for Assad remaining in power. Furthermore, it is reported that he supports Russian activities in the country.

Trump's vision could lead to a change in relations with US allies around the world. Trump would like to "exact a price" for US protection for Asian and Gulf allies, does not shrink away from a reassessment of placing US troops in Japan and South Korea and calls for a review of US NATO membership, against the backdrop of the perception that the US pays for crises that it is not a part of.

However, the report concludes that Trump's limited familiarity with foreign arenas gives added importance to the team that he brings to the White House. The State Department is expected to have strong influence in setting policy agenda on these issues.