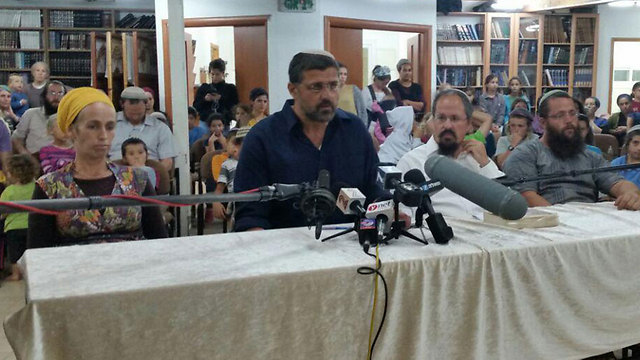 Following High Court's decision to reject a government request to delay the evacuation of Amona set to commence in December, residents convene an emergency meeting, make an emotional plea to the PM; 'Our lives are in your hands. The responsibility will be yours alone.'

Amona residents called an emergency gathering Monday evening during which they appealed directly to Prime Minister Benjamin Netanyahu following the High Court of Justice’s rejection of a request submitted by the government to extend the deadline for the evacuation of the illegal outpost in the area.

“We, residents of Amona turn directly and personally to you prime minister. The lives of the residents of Amona, 42 families, (including) young children are in your hands. The hand which will evacuate Amona on the first night of Hanukkah is yours,” said Avichai Boaron, who is heading the struggle against the evacuation, in reference to the date in December on which the evacuation is set to commence.

“For us it is extremely simple and clear. If we remain in Amona after December 1, if Amona is (legalized) you and your coalition (are worthy) of a medal of honor...There is no one to blame and no one to accuse. The responsibility is first and foremost yours. After, and only after, the responsibility lies with your ministers,” he continued.

Boaron also said that if the prime minister stood true what he described as his “mission” the residents would salute him. However, he threatened, “if you don’t regulate (sic.) the lives of the children here, we will stand here as a wall together with many thousands from all across Israel who will gather here on the day of the evacuation, in God’s city, a wall which we will create in the coming days in order to do all within our power so that Amona will not fall for a second time.”

Addressing the prime minister once again, Boaron said that the residents never had any faith in the High Court and therefore do not blame it for its decision.

“It is in your hands to save Amona or, God forbid, destroy it. We were not surprised by the decision by the High Court of Justice. We didn’t pin our hopes in it which is why we are not coming to it with complaints or allegations. You, prime minister, are the first commander and will decide the fate of Amona.”