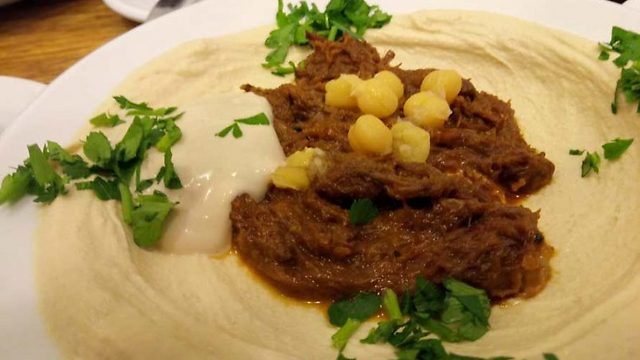 Following massive fires, a coexistence food festival in Haifa is set to be held from December 7-9; festival organizer: 'they are trying to crack the beautiful coexistence that we have here, but we won’t let them.'

It’s hard to believe that nobody ever thought of this before — silky hummus topped by pulled barbeque beef that falls off the fork (or the pita, as the case may be.) The host is Marun Issa, a long-time Arab restaurateur, in his hole-in-the-wall hummus joint, a Haifa icon, called Abu Marun’s.

It’s also Jewish chef meets Arab chef as part of the Al-Sham festival in downtown Haifa, an Arab food festival which pairs Jewish and Arab chefs together to offer modern takes on traditional Arab recipes. Last year, 40,000 Israelis attended the festival and this year organizers are hoping for even more.

The festival comes after a series of forest fires, some of them deliberately set by Palestinians, raged through parts of Haifa, completely destroying more than 500 homes and damaging 1300 others. The damage in Haifa is estimated at tens of millions of dollars, but Haifa mayor Yona Yahav said the Al-Sham festival will go ahead as planned.

“I hope people from all over will come to support us by coming to the festival,” Yahav told The Media Line. “I want them to go around and see the scenery. This is the most beautiful city in Israel.”

Al-Sham means the Levant, and refers to the area that is today Syria, Lebanon, Israel and Jordan. The area has a unique culinary tradition that uses grains, vegetables and herbs as its base.

The brainchild behind the festival is Nof Atamnah-Ismaeel, an Israeli-Arab winner of Israel’s Master Chef competition two years ago. She also happens to have a PhD in microbiology, and worked as a researcher.

“We take dishes that are threatened with becoming extinct, and we modernize them,” she told The Media Line. “To preserve dishes you have to modernize them, or you will lose them. Our palate has changed and we don’t like the same things we liked 100 or 200 years ago. If you take a dish and add modern touches, people will embrace it.”

She decided to choose from her stable of 300 Arab recipes, and pair Arab and Jewish chefs to come up with a modern version of each dish. The collaboration is important for both chefs, she said. The dishes will be sold for up to $9 at the festival, giving patrons a chance to sample a wide range.

“If you are an Arab chef and you remember how a dish tasted in your grandmother’s house, your heart won’t let you change it,” she said. “The Jewish chef does not have these memories, and comes to the dish with a pure clean mind. Together they balance each other and create the perfect dish with both tradition and modern touches.”

The city of Haifa has long been a model of coexistence in Israel. While Jerusalem has a higher percentage of Arab residents (about one-third), most Arabs and Jews in Jerusalem live separately. In Haifa, the populations live together, and eat in each other’s restaurants.

Mayor Yahav said the city’s coexistence traces back to the first mayor of Haifa, Hassan Bey Shukri. A Muslim, he was appointed by the Turks in 1914, and survived several assassination attempts after he announced his support for Zionist immigration to Palestine. He fled to Beirut in 1936, and when he died four years later, many of the Jewish notables in Haifa attended his funeral.

“This is the only place on earth which has had full peace between Jews and Arabs for more than 100 years,” mayor Yahav said. “I don’t have an intelligent answer for why coexistence works here and not in Akko or Tel Aviv, but it shows it is possible.”

The idea of the festival is that attendees will get a map with the location of all of the participating restaurants. Each restaurant will have a signature dish, such as al-basha oaskru, which the map describes as “a Syrian dish, meaning the pasha and his soldiers. Shishbarak dumplings (the soldiers) and a bulgur wheat kibbeh (the pasha) are cooked in yoghurt.”

There is also the “hummus around the world” project. Seven Arab chefs will host Israeli chefs for an international take on hummus. Besides the pulled beef, there will be Thai hummus with kao phat, ground beef seasoned with Thai roots, basil and a fried egg. There will also be a Greek-inspired hummus with lima beans, lamb kebabs and eggplant. For those who prefer Mexican food, there will even be a hummus taco with avocado, tahini, veal and Habanero Chipotle mole sauce.”

This year, the festival is taking place in the shadow of the fires. Last year, it was during a wave of Palestinian stabbing attacks against Israelis. Atamneh-Ismail said these events make the festival even more important.

“If we don’t go ahead with this festival, we let them win twice,” she said. “It means they killed someone, or destroyed forests or houses, and they also destroyed our future. They are not happy that people here are living together, and they are trying to crack the beautiful coexistence that we have here, but we won’t let them.”

The festival is to take place on the weekend of December 7-9.