First snow of the Hermon 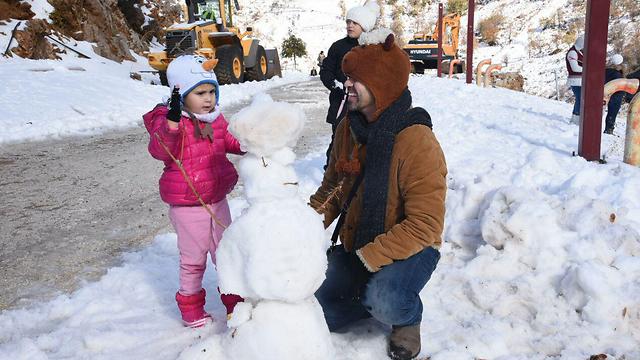 Israelis flock to Mt. Hermon to enjoy first snow of the season

After two days of intense winter storms, the Mt. Hermon ski resort is now open to the public to play in the snow; snow levels are more suitable for sledding and building snowmen than skiing at this time however.

Hundreds of people are flocking to Israel’s highest peak, Mt. Hermon, to enjoy the first snowfall of the season.

People are breaking out their sleds and inner tubes, and are building snowmen all over the site after the first winter storm of the season finally hit Israel.

A man and his daughter build a snowman on Mt. Hermon (Photo: Aviyahu Shapira)

One family woke up at 5:30am and made the trip to Israel’s northernmost point all the way from the southern desert city of Beer Sheva.

Yossi and Miri Cohen of Beer Sheva said “this is true fun. The roads were open and there wasn’t the usual traffic which leads up to the Hermon. It’s really fun for the kids, who have never seen snow before.” “We had snowball fights and now we’re building a snowman,” said their son Moshe, right before he threw a snowball at his father.

However, there still isn’t enough snow to ski on.

Liran Milles said that “there are always people who try to come and ski, even when there isn’t enough snow. WE ask them to put their skis back in their cars. There’s enough snow to enjoy and play in. The conditions will be right for skiing only when we get the next snowfall. We have to remember that we’re only at the beginning of December, and we still have a long winter ahead of us.”