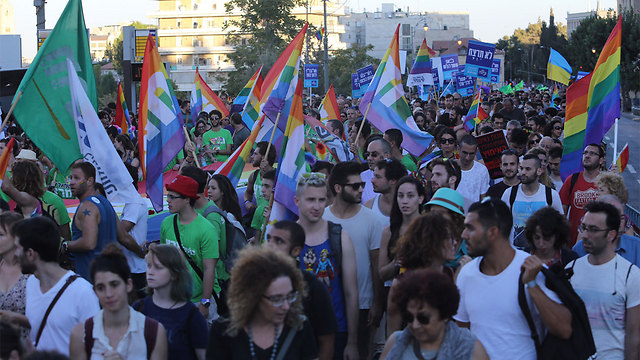 Avichai Mandelblit tells High Court of Justice that foreign same-sex marriages will be treated as identical as heterosexual marriages when it comes to applying for citizenship; Attorney: ‘This is great news for the gay community...In Israel in 2017, there is no place for discriminatory commentary on the basis of sexual orientation.’

Attorney General Avichai Mandelblit informed the High Court of Justice (HCJ) on Thursday of his decision to make the process for acquiring Israeli citizenship the same for LGBT foreign couples as straight foreign couples.

“This is a huge victory,” said the chairman of the Gay Dads Association Udi Ledergor, whose organization filed the petition. “The old procedure struck a fatal blow to the possibility of same-sex couples from becoming parents and giving their children the status they deserve. We decided to attack all the main discriminatory elements, one of which is the absence of naturalization possibilities for foreign spouses.”

Today, the process for acquiring full citizenship is only applicable to heterosexual couples between a ‘husband and wife’ with the process for obtaining citizenship for straight couples comprising one foreigner is significantly shorter than for gay couples. Indeed, a gay foreign spouse is currently required to wait longer until the conclusion of the process, at which point they are forced to forfeit their foreign citizenship.

According to the procedure for straight couples, foreign spouses are eligible to receive citizenship after four years. By contrast, the same procedure for LGBT couples takes seven years.

Furthermore, at the end of the protracted process, the foreign common-law spouse receives permanent resident status but not full citizenship. Additionally, if in exceptional cases citizenship is provided to a foreigner, he or she is obliged to give up their foreign citizenship.

This week, the state responded to the HCJ on the matter promising to remove the requirement for forfeiting foreign citizenship upon the receiving of Israeli citizenship.

For the first time, the state also announced that it would add a clause to the requirements intended for same-sex couples, common-law partners and spouses that they will receive the identical treatment to that received by straight couples.

That is to say that the process for receiving citizenship for same-sex couples will henceforth take four years and will not conclude with permanent residency status only.

The attorney general personally determined and instructed the relevant officials to update the procedure to meet new equal criteria. Nevertheless, the state has emphasized that this will not mean that it recognizes same-sex marriages but rather it will only affect the procedure for acquiring citizenship for marriages of such a kind .

The goals of the Gay Dads Association has yet to end however, with Ledergor promising continued efforts to battle against other clauses deemed discriminatory. “The struggle is not yet over and next month there will be a discussion about a petition to the HCJ about surrogacy and in February there will be one about adoption. In the end we will get the full equality that we so deserve,” he said.

Iris Sheinfeld also praised the new changes. “This is serious news for the gay community. I welcome these significant steps that have been taken today for the equal rights of same-sex couples and straight couples ... There is no reason why same-sex couples should undergo a long and arduous process to receive citizenship for a foreign spouse, while the process for heterosexual couples is a lot shorter and easier. In Israel in 2017, there is no place for discriminatory commentary on the basis of sexual orientation.”