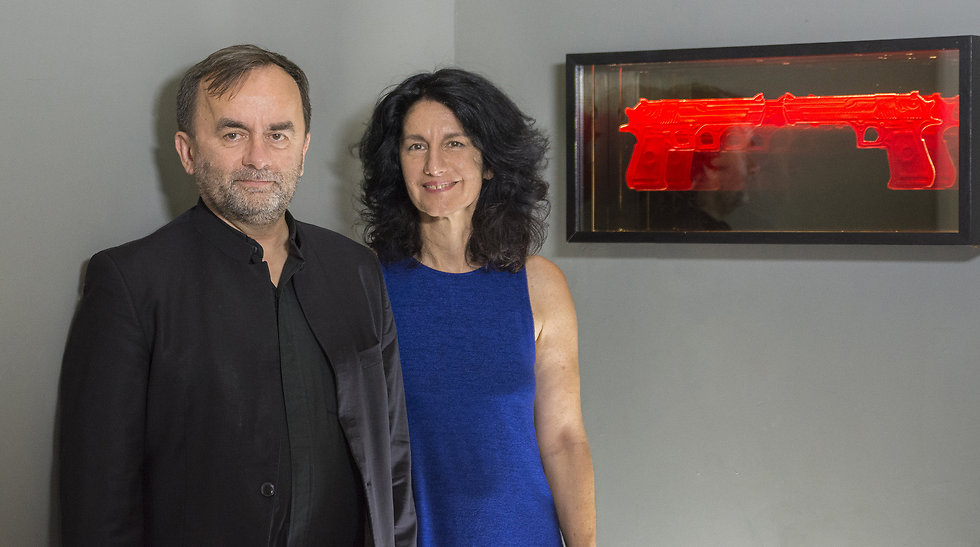 With images of barbed wire, concentration camps, and maps detailing once-vibrant Jewish communities who were erased from existence, the Museo de Holocausto in Guatemala could easily be taken for another deeply sobering Holocaust museum in the United States, Europe or Israel. However, the story of Central America’s first and only Holocaust museum is as remarkable and profound as the subject matter within, and truly reflective of the human story contained within the tragedy of the Holocaust.

The museum was launched by Yahad-In Unum (YIU), a French Christian organization dedicated to locating the mass graves of Jewish and Roma victims of Nazi mobile killing units in the former Soviet Union, mainly in Ukraine, Belarus, Poland, and Moldova. The organization—whose name comes from the Hebrew and Latin words for ‘together’—was founded by French Roman Catholic Priest Patrick Desbois.

Patrick Desbois and Mira Maylor with her piece 'Desert Eagle' (Photo: Mira Maylor)
Desbois is the grandson of a French soldier who was sent to a Nazi prison camp in Rava-Ruska during World War II. Following a trip to Ukraine in 2002 to see the place where his grandfather was imprisoned, Desbois was perplexed that no one he asked seemed to know where the approximately 10,000 Jews murdered in Rava-Ruska were buried. Over several visits and dozens of videotaped interviews, he was able to discover the unmarked forest graves of thousands of forgotten people. “I realized they were left like animals,” he said. “My shock when confronted with this fact is difficult to describe.” Desbois since went on to write the groundbreaking book “A Holocaust of Bullets: A Priest’s Journey to Uncover the Truth Behind the Murder of 1.5 Million Jews.” He has also expanded the research activities of YIU, culminating in the founding of the new museum in Guatemala City.

‘Art is a universal language’

The exhibition is the result of a chance encounter between Israeli artist Mira Maylor—also the granddaughter of a Holocaust victim—and Father Patrick Desbois in Los Angeles. “I was so impressed by him and the work he does,” said Maylor. “He really connected to my art and said he felt it speaks to the work he does and I was able to see that. That’s how our cooperation started and it is a very important vehicle for advancing tolerance, compassion and humanity in the world.”

Maylor eschews words in her works and instead relies on elemental materials such as iron, wood, glass and dirt to convey messages of “disaster, life and death, and the elusive boundaries of morality.”

For example, one of Mira’s most well received work in the exhibition, entitled ‘Dark Cover,’ depicts a woman’s hands concealing her face—in joy or sorrow—within a wooden box. This enigmatic work is meant to illustrate the elusive boundaries of morality, a concept that is central to any violent episode, especially the Holocaust.

Another piece that has resonated with many of the museum’s visitors is that of two pistols facing one another. It is meant to be a play on two mirrors facing one another, in which the reflection continues seemingly infinitely. However, here the two guns represent the concept that violence and death are seemingly never ending and produce no winners, something that Mira and YIU hope will help people change society for the better.

In a society where violence is an everyday part of life due to high rates of poverty, crime, instability and the prevalence of the drug trade, messages of opposition to violence are vital for young people, especially those in school. In addition to the works done by Maylor, a unique photographic exhibition on mass graves in Ukraine by YIU’s investigative team will be presented. The two art exhibitions cross not only cultural boundaries, but also those of religion and geography, to combine for a powerful and poignant display.

‘Lessons for the future’

The importance of such a museum is not lost on Guatemalans and both Desbois and Maylor hope the message of the museum speaks to everyone who visits, especially the young.

“A museum that details the historic tragedy of the Holocaust appeals to Guatemalans, who have also suffered greatly from war,” says Maylor in reference to the Guatemalan Civil War, which lasted from 1954-1996 and claimed the lives of more than 200,000 people. “It may be cliché, but art is a universal language that can cross any border and I hope the humanity displayed here serves to inspire people to abandon violence.”

Executive Director of YIU, Marco Gonzalez, is a native Guatemalan who oversaw the construction of the museum in Guatemala City and has the same hope. Following a new nation-wide law by the Ministry of Education requiring all Guatemalan schoolchildren to learn about the Holocaust, Gonzalez notes that, “There is a big opportunity here since the Holocaust is so recent and so widely researched that it can’t be denied. In Latin America, and specifically in countries like Guatemala that have suffered violence, teaching people about the evil that can be perpetrated by one human being onto another and the consequences of indifference can be the key to institute change in a violent society.”

Visitors at the musem (Photo:Museo de Holocausto)
According to Desbois, the initiative and the close working relationship between YIU and the Guatemalan Ministry of Education is promising. “The children are very interested. Most of them don’t know what a Jew is or anything about the Jewish people. As Christians, they have a partial story from the Bible, but we fill them in on 2000 years of Jewish history and the history of anti-Semitism in Europe before the war. We are also training them to understand dangers of hatred and racism and making them think about how to prevent it in their own society,” he said. Yehudi Sabbagh, President of the Jewish Community of Guatemala, says that over 6,000 Guatemalan students have already visited the museum, and hope the figure grows in the interest of “a more tolerant and progressive Guatemala.” Israel’s chargé d’affaires in Guatemala, Yoav Katz, agrees, saying, “We believe that the lessons of the Holocaust are universal and relevant to every country. It is in this context,” he adds, “that we have the honor of being a part of Israeli artist Mira Maylor’s arrival in Guatemala to display her work at the Museum. Mira's works lift everyone’s spirits, sharing a universal language that helps ensure such events never happen again.”