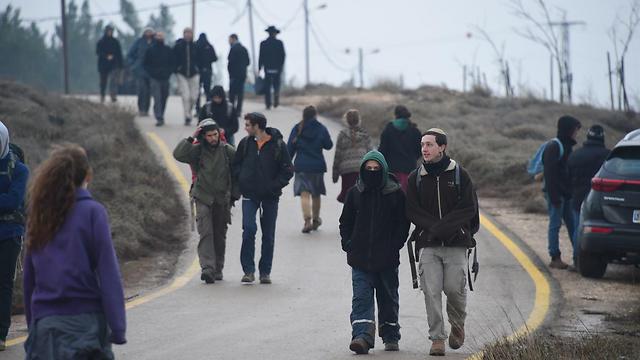 Five days before the deadline is reached for Amona evacuation, state requests from the High Court of Justice to approve an extension until February 8, 2017 in order to facilitate implementation of recent compromise accepted by the residents; ‘The request is required to complete the solution,’ the Attorney’s Office says; ‘There won’t be anymore extension requests.’

The state submitted a special request to the High Court of Justice on Tuesday evening asking to delay the evacuation of Amona by 45 days in order to facilitate the implementation of the new agreement that was reached on Sunday between the Israeli government and the residents of the outpost.

In the request subitted by the Attorney’s Office, it was argued that the extension was a necessary prerequisite of the accepted compromise since time was required to install temporary living facilities for the Amona residents.

The request also emphasized that the state would seek no further extensions even if the current solution were to collapse.

“This is a concrete request that is intended to allow the evacuation of the Amona residents through their own volition in a peaceful manner, in a way that will significantly reduce the potential consequences of the affair while providing an adequate and proper response to the families who live in Amona.” the request read. “The requested time is short, limited and absolutely final,” it assured

It went on to say: “The state believes that there are two fundamental difference between the previous extension request and the one currently being submitted. Firstly, the residents of Amona are obligated to acquiesce in an agreed upon evacuation without any conflict or resistance. Secondly, the time being requested is 45 days rather than than seven months which was previously sought.”

According to the new resolution, 24 families will remain on the mountain in a nearby plot—twice as many as the previous plan that was rejected by the outpost residents. With the securing of the compromise which broke a months-long impasse of offers, rejections and counter offers, the state was aware from the outset that it would be required to seek from the High Court a one-month extension to the evacuation deadline—which is currently set for December 25—to allow for time to build the new structures.

The state therefore asked the High Court to sanction the extension request, bringing the final evacuation deadline to February 8, 2017.