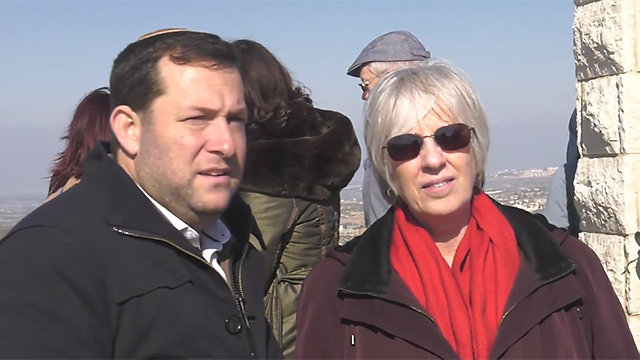 During a visit to the West Bank, Becky Norton Dunlop, a senior official in President-elect Donald Trump’s team, said she understood Israelis who wanted to expand in the entire state of Israel, urged international community to note what is really happening in area.

Becky Norton Dunlop, a senior official in President-elect Donald Trump’s transition team, said during a tour of the West Bank this week that “Anyone who comes and visits Judea and Samaria sees that it is an inseparable part of the State of Israel.” Republican members of Congress and members of the European Parliament also joined the tour of the area. The diplomatic delegation arrived this week in Israel as part of the activities undertaken by the Foreign Relations Unit of the Samaria Regional Council which was formed by the head of the council, Yossi Dagan.

Becky Norton Dunlop with Yossi Dagan
Dunlop, who also visited the area last year, said that she was delighted to return once again.

“As an American citizen, I empathize with the Israeli people who want to settle on their entire state, to expand their communities and their homes, and they should have safe places to raise their children,” she declared.

Delegation given a tour of the West Bank
Dunlop went on to praise the fact that Arabs and Jews live in peace as neighbors in Israel. “During the visit we saw that Arabs living in Israel are completely able to work together with their Israeli neighbors,” she said.

It is unclear precisely what Trump's Israel policies will be. However, he repeatedly pledged during his election campaign to move the US embassy from Tel Aviv to Jerusalem—a promise which Israeli officials have urged him to follopw up on.

Indeed, the Israeli ambassador to the United States urged as such on Tuesday.

Ron Dermer says it would be a "great step forward" for peace. He teold a Hanukkah reception at the Israeli embassy in Washington that it would send a "strong message against delegitimization of Israel."

The US and nearly every other country have their embassies in Tel Aviv.

US presidents have repeatedly waived a law requiring the embassy to be moved.

This article was translated from Hebrew to English. All efforts have been made to maintain the accuracy of the original meaning of statements quoted in this article.