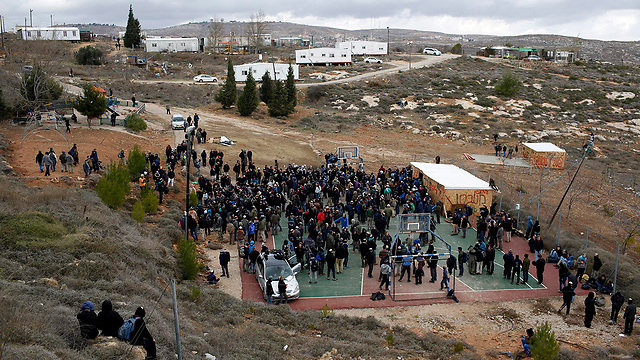 Court sets condition as it deliberates state's request to postpone the evacuation of the illegal outpost by 45 days so alternative housing can be set up for them; 'To remove any doubt, the residents of Amona are asked to declare in unequivocal language that they agree and commit, all as one, to a peaceful evacuation and without conflict or resistance.'

The High Court of Justice asked the representatives of Amona on Wednesday evening to file a document by 10am Thursday in which they unequivocally commit to a peaceful evacuation of the outpost.

The High Court is currently deliberating on the state's request to extend the deadline for the illegal outpost's evacuation by 45 days in an effort to implement the willing evacuation compromise reached with the residents. "To remove any doubt, the respondents—the residents of Amona—are asked to declare in unequivocal language that they agree and commit, all as one, to a peaceful evacuation and without conflict or resistance," the judges wrote.

Settlers gather in Amona (Photo: EPA)
But on the mountain near Amona, the tractors did not wait for the High Court's decision and began preparing the nearby Plot 38 that, according to the compromise deal, will house 24 homes. The Israel Civil Administration stopped the works several hours after they began.

Tractors working in Amona (Photo: TPS)
The Mateh Binyamin Regional Council said that "the plot is under the council's ownership for the next eight months. The council has the right to work on it and is conducting agricultural activity on the land." Meanwhile, the Palestinian land owners on whose property Amona was built filed their objections to the state's request to postpone the evacuation.

"This request to postpone the evacuation—which was filed four days before the deadline set in the ruling, and after the state had two years to carry it out—is a new record in the disintegration of even the appearance of maintaining values like the rule of law, equality, protection of property rights, and fairness," said the Palestinian land owners' response, filed with the help of the legal NGO Yesh Din.

Yesh Din’s representatives claimed that granting an extension to the evacuation deadline would be akin to surrendering to the threats made by the Amona residents.

"One can only imagine how would the state respond if a common citizen—who does not have the connections and political backing the residents of Amona enjoy—threatened the authorities with resistance to the execution of a court ruling," the NGO wrote.

"In fact, there is no need to imagine. Israel has been scarred by difficult evacuations of poor citizens who, for financial reasons, have been issued with evacuation orders—in Kfar Shalem and Giv'at Amal (both neighborhoods in Tel Aviv), in the Bedouin village Al-Araqeeb in the Negev, and of course in the Palestinian sector in the West Bank."