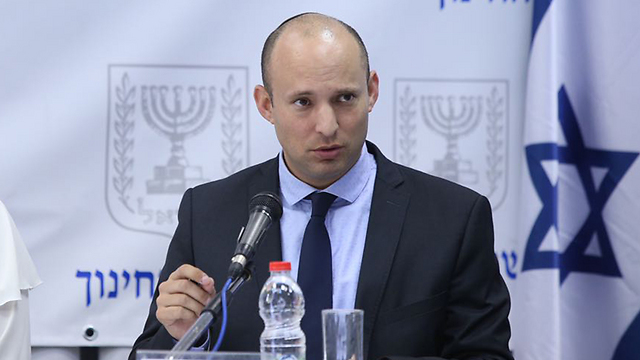 Bennett moves to clamp down on ‘Breaking the Silence’

Education minister sponsoring bill banning ‘organizations that operate in the country and the world that harm soldiers and the IDF from entering educational institutions in Israel’; proposal garners support across political spectrum, due to be brought before legislative committee within two weeks;: ‘organizations are trying to spread their lying doctrine among our children.’

Education Minister Naftali Bennett (Bayit Yehudi) is spearheading a law proposal designed to completely clamp down on “organizations which operate in Israel against IDF soldiers.” The proposed legislation, which will be prepared and submitted by MKs Shuli Mualem and Bezalel Smotrich—also from the same party—aims to prohibit such organizations from entering Israeli schools and other educational institutions. ‘Breaking the Silence’ and its activities have provided an impetus behind the initiative, featuring high on Bennett’s agenda as the bill is formulated after an unsuccessful attempt to ban the group last year from schools.

Naftali Bennett (Photo: GPO)
Moreover, Bennett caught wind of the fact that its speakers had delivered lectures in schools during recent weeks to students in a number of different institutions across the country. The bill therefore, seeks to grant Bennett the authority, “as head of the (educational) system and responsible for matters relating to Israeli students, to forbid people or organizations that are not part of the education system to hold activities within educational institutions when the nature of their activities are to undermine the aims of education or those which harm IDF soldiers with a consensus across Israeli society,” the bill reads. “The educational system in Israel is not only the system that strives to achieve results for students, but it is also the belief system pursuant to the laws and values acquired by it.” The bill has garnered support from across the political spectrum, even managing to harness the endorsement of the opposition, thereby increasing the chances of the bill’s passage in all stages of the legislative procedure.

Breaking the Silence activist delivers a speech (Photo: Photo: Louise Garin)
Among those who are planning to back the bill are Yesh Atid leader Yair Lapid, Kulanu MK Meirav Ben-Ari, Oded Forer from Yisrael Beytenu, Likud’s Yoav Kish and others. The bill’s authors estimate that the proposed legislation will pass in its reading in the The Ministerial Committee for Legislation within the coming two weeks. Lapid, who was among the bill’s chief architects, said: “It cannot be that the educational system of the State of Israel allows the entry of organizations which slander the officers and soldiers of the IDF, calls them criminals and encourages the refusal to carry out orders. Think what happens to a student who hears these stories the moment before he is drafted into the IDF. What does it do to his motivation and his willingness to contribute?” Lapid went on to say, “These kinds of organizations harm soldiers, put them and Israeli state officials at risk of being brought to trial by the international community by disseminating outright lies.”

The same organizations are currently trying to spread their “lying doctrine”, Lapid continued, “among our children. In order to protect the IDF, its soldiers and the values of the state...we must stop this.”

Bennett is seeking to push the bill as swiftly as possible by circumventing the usual time procedures entailed in the legislative process.

Normally, proposed bills require 45 days, from the moment that they have been submitted to the Knesset Secretariat, before being brought before the Ministerial Committee of Legislation.

However, in this instance, Bennett has signalled his intention to ask the committee to approve an exception from the submissions requirements in order to expedite the entire process.

The first reading is expected to take place on Sunday next week and will then be brought for a preliminary reading in the Knesset plenum on Wednesday. Here Bennett is expected to ask for a complete ban on the entry of Breaking the Silence into schools.

“Organizations that go around the world harming IDF soldiers will not go into schools,” Bennett said. “The ministry of education invests a lot in promoting values such as contributing to the state and even organizations that harms the state, whether in or outside of Israel, will not harm this. In the coming weeks we will act together with all our partners ...and pass this important bill.”

Breaking the Silence issued its own response to the proposal, delivering a direct attack on Bennett.

“Bennett can continue in his attempts to turn the educational system into an educational system for occupation and destruction of all democratic values on the altar of the settlement enterprise but this failed in the past and it will fail this time,” the statement read.