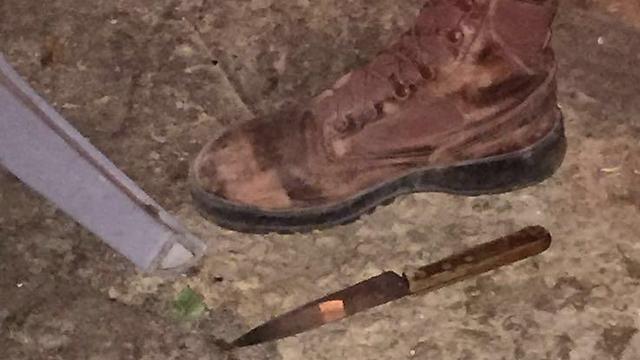 A 33-year-old Palestinian terrorist was shot and killed while attacking a group of IDF soldiers conducting an arrest operation in the Far'a refugee camp in the West Bank; IDF forces opened fire after terrorist failed to heed orders to stop.

IDF forces shot and killed a knife-wielding terrorist overnight Monday after he attacked a group of soldiers in the Far'a refugee camp in the West Bank.

The terrorist, 33-year-old Mohammad Al-Salahi, shouted "Allahu Akbar" and did not heed calls to stop.

The incident occurred during the course of an arrest operation conducted by the elite Duvdevan Unit targeting wanted suspects in the refugee camp. The terrorist ran at soldiers with a knife drawn and attempted to stab them before being shot and later pronounced dead.

During the operation, IDF forces were further attacked with gunfire and explosive devices thrown at soldiers. There were no IDF casualties.

According to Palestinian sources, the incident occurred in Al-Salahi's home while IDF forces attempted to arrest him, but Israeli officials said Al-Salahi was not the target of the arrest operation.

The operation resulted in the arrest of four wanted Palestinian suspects who were transferred to the Shin Bet for questioning. Another five terror suspects were separately detained in other villages by the IDF, Israel Police and Shin Bet for a range of offenses including violent acts, incitement and possession of weapons.