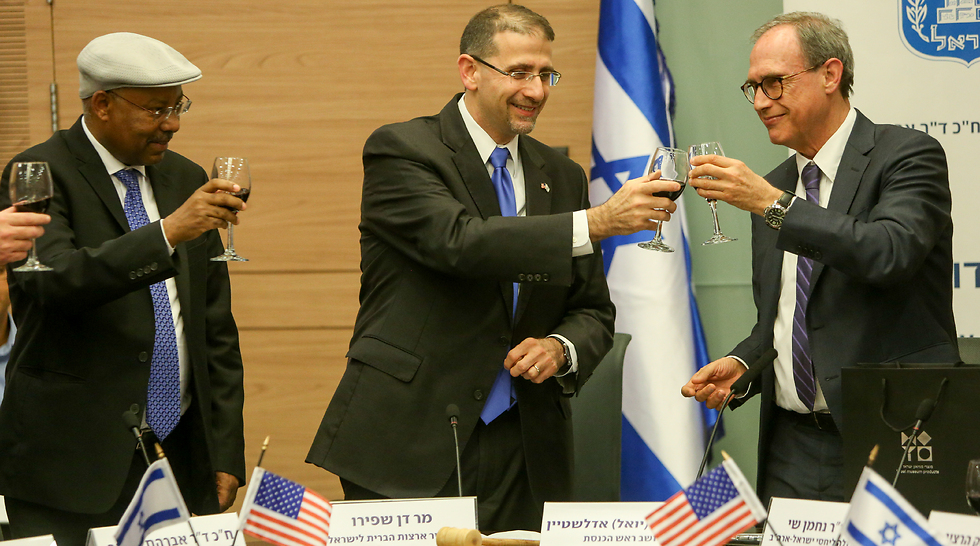 Outgoing US Ambassador to Israel Dan Shapiro is thrown a goodbye celebration at the Knesset; Minister of National Infrastructure, Energy and Water Resources Yuval Steinitz calls Shapiro 'the best US ambassador to Israel the country has ever had'; 'the US considers Israel an incomparable ally in the Middle East,' says Shapiro in conclusion of his time in Israel.

Minister of National Infrastructure, Energy and Water Resources Yuval Steinitz (Likud) praised Shapiro at the gathering, saying that he has been “the best US ambassador to Israel the country has ever had.” The farewell event took place three days before the inauguration of President-elect Donald Trump and the expected confirmation in the coming weeks of David Friedman as the new ambassador to Israel.

MKs Neguise (L) and Shai (R) toast Shapiro. (Photo: Hillel Maeir/TPS)
Steinitz added, “If I had to describe the most important function Daniel Shapiro fulfilled in an impeccable manner during a period of passionate disagreements and difficult conditions, it would be the role of ‘shock absorber.’” “The fact that … our bilateral relations and cooperation grew in strength despite some severe arguments is largely thanks to you. Best I can tell, you have been the best ambassador that Israel ever had, and both the Israeli and the American people owe you a great debt of gratitude,” said Steinitz.

Shapiro took office as ambassador in August 2011, two years after being appointed senior director for the Middle East and North Africa of the US National Security Council, during which time he developed a close relationship with former US Special Envoy for the Middle East Peace David Mitchell.

During his tenure as ambassador to Israel, Shapiro had to weather the storms of frequent tensions between US President Obama and Prime Minister Benjamin Netanyahu, especially with regards to the explosive issue of the Iran nuclear deal.

Shapiro (Photo: Gil Yohanan)
Netanyahu leveled sharp criticism at Shapiro when the latter argued that Israel maintains “two standards of adherence to the rule of the law in the West Bank: One for the Israelis and one for the Palestinians.” Netanyahu said the accusation was “incorrect and unacceptable,” especially in light of the murder of Dafna Meir, who had been murdered in her home in Otniel earlier that day. Shapiro later recanted his statement.  Opposition head and Zionit Union Leader Isaac Herzog praised Shapiro for his service and for his readiness to “dig deep into Israel’s story and its complications.” These, Herzog argued, allowed the ambassador to capture and transmit accurate messages on behalf of Israel. Shapiro seconded Steinitz’s contention, saying that contrary to popular opinion and despite some important issue-based disagreements, Israel and the United States actually grew closer during his tenure in Tel Aviv. He cited cooperation in the fields of security—particularly the unprecedented military aid package the US signed with Israel—military defense systems such as missile defense and Iron Dome, technology and economics. He also said the Obama administration has shown unprecedented support for Israel in the international arena, especially at the United Nations during Operation Protective Edge and regarding Israel’s right to to self-defense. “Our mutual values continued to grow in strength, and the US considers Israel an incomparable ally in the Middle East,” stated Shapiro. “President Obama sent me here with a vision of strong rapprochement between our countries, with a message that ‘you are not alone.’ I have endeavored to remain faithful to this vision every day,” he concluded. Shapiro also vowed the embassy staff would continue to build cooperation on shared values, and security and economic interests. “It doesn’t take any great wisdom to be an ambassador when there are no challenges or for two countries that do not expect anything of one another,” conveyed Speaker of the Knesset Yuli Edelstein (Likud). “You have fulfilled your duty with fairness, as a faithful representative of the United States but also as a true friend of the State of Israel,” he said to Shapiro.

Following the event, Shapiro met with President Reuven Rivlin, who asked the outgoing ambassador to convey Rivlin’s appreciation to President Obama. “Although, from time to time we have had some differences of opinion, friends take care one of each other. They sometimes criticize one another, but we have done that as friends, and the people of Israel appreciate this very much,” Rivlin said.