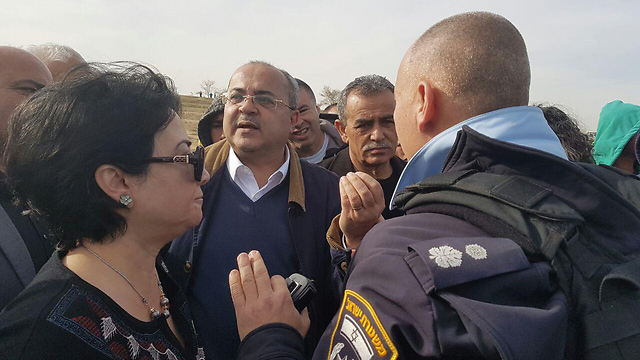 Joint List members Zoabi, Tibi, Zahalka and Touma-Suleiman try to enter Umm al-Hiran, where demolition of illegal houses is underway, after violent clashes that resulted in the death of a policeman and the shooting of a resident of the village, who police says tried to ram his car into troops.

Arab MKs from the Joint List clashed with police at the Bedouin village of Umm al-Hiran in southern Israel on Wednesday morning following the violent clashes earlier that resulted in the death of a policeman and the shooting of a resident of the village, who police says tried to ram his car into security forces.

Police arrived at the village in Israel's southern Negev district early Wednesday morning to carry out demolition orders against illegally constructed homes, creating a human chain—with some mounted on horses—to prevent anyone from entering the village while the planned demolition was underway.

The Arab MKs—including Haneen Zoabi, Jamal Zahalka, Ahmed Tibi and Aida Touma-Suleiman—were joined by other protesters who tried to push the policemen away. Some of the MKs claimed several of the policemen hit them in their lower body. The two sides also exchanged shouting.

"You are interrupting us in doing our job as members of Knesset," the MKs told the policemen. "We won't let you demolish Umm al-Hiran. Why won't you let us in?"

A police officer responded, "We have a duty—both you and I—to protect them (the residents), and we're not doing this because of your behavior. Give me a chance; we're in the same boat."

The MKs rejected this statement, saying "We're not in the same boat. If we won't let us in, we'll come in by force."

Police said Abu Alqiyan was a member of the southern branch of the Islamic Movement in Israel and that he might also have had ties with ISIS.

"He was wounded and might have also been killed. You keep inciting against members of Knesset," Zoabi accused.

MK Ayman Odeh after he was injured in the clashes

Odeh, who was taken in light condition to the Soroka Medical Center in Be'er Sheva for treatment, told Army Radio that "some 1,000 policemen came and brutally attacked the people who came to Umm al-Hiran."

Elaborating, Odeh said that "Policemen jumped me, beat me up, brutally shot at me. It's a shame people are killed, it's a shame everything is being destroyed."

The Joint List leader said that the court instructed the state to negotiate with the residents before carrying out the demolition orders. "We need to honor court decisions. So when it comes to Amona, there's no court? Do court decisions only apply to Arabs? This is a disgrace."

Odeh said that even though negotiations were ongoing until midnight, police "carried out an order that came from (Prime Minister) Netanyahu, who wants to inflame the situation. They destroyed homes in Qalansawe and now they're demolishing an entire village."

Public Security Minister Gilad Erdan, meanwhile, claimed that "Odeh was not part of the negotiations. He was there (at the village) to inflame the tensions and incite to violence."

The minister backed the police, saying "What happened (in the village) was that a terrorist carried out a vehicular attack against police forces who were at the scene ... in an effort to kill as many policemen as possible even before the evacuation has begun."

Erdan decried the "inflammatory calls that distort the picture of what happened on the ground," calling on the Joint List MK to "stop the incitement. Every comment made now could lead to grave results on the ground. Take responsibility over your words and stop inciting to violence and inflaming the situation."

He declared that "violence and terrorism will not win over the rule of law," adding that he "hopes this won't become a day that marks a turn in the relationship between the Bedouin and state authorities. But if it does, MK Ayman Odeh has greatly contributed to the matter."

Housing and Construction Minister Yoav Galant condemned "the Bedouin violence that awakened this morning," saying it is "among the gravest incidents seen in the south in recent years" and calling to answer such violent "with a firm hard and uncompromising measures."

He called on the police and on Erdan "to increase the enforcement in the Negev and demolish all additional illegal homes in the Umm al-Hiran area today."

Galant went on to add that "an incident in which a terrorist takes advantage of clashes during an evacuation to carry out an attack is grave and reflects the potential of the terrorism that is created when the Bedouin population is being incited against the state and its authorities. Security forces must restore order to the south immediately. The State of Israel will not allow the strengthening of terror cells in the Negev."

He slammed the Arab MKs who arrived in Umm al-Hiran to clash with police, saying "MKs cannot use their status and immunity to disturb security forces as they're carrying out their assignments. The participation of Joint List MKs in the Bedouin's protest against the evacuation causes unrest, constitutes incitement and encourages violence."

'A green light to kill'

Protesting the shooting of Abu Alqiyan, Zoabi railed that "the police were given a green light to kill, and that is what they did."

"It's just like the Palestinians who were expelled in 1948. It's this perception that this is land that belongs to Jews: 'We're building for the Jews and expelling the Arabs,'" said Zoabi.

MK Zoabi, along with other Arab MKs, clashing with police (Photo: Israel Yosef)

"Show what police are doing to people. There are eye witnesses. Ask the MKs and don't listen to police which is lying over and over against. Police killed 60 Arab citizens in the Negev," Zoabi added.

The firebrand MK further blamed police of "persecution, not just expulsion and demolition," saying "there are those who killed in the past and none of the policemen were investigated." MK Tibi, meanwhile, asserted that "there is no doubt this is an escalation in the negative treatment of the state towards its Arab citizens. The state treats its Arab citizens as enemies, and that is why even when they are protesting against the demolition of a house—which is part of their basic right for a roof over their heads—they are being shot and killed, and (police) is attacking both citizens and MKs."

Arab MKs clashing with police (Photo: AFP)
He called on the international community "to provide protection to the Arab minority in Israel vis-à-vis the discriminatory, brutal and aggressive treatment of the Arab minority."

Tibi contended that "someone must be trying to cover up his own problems by creating a conflict and crisis with the Arab public," implying at Prime Minister Benjamin Netanyahu, who is currently under police investigation. "The deeper the investigation in Jerusalem, the more heads will roll in Qalansawe and Umm al-Hiran."

Meretz MK Issawi Frej concurred with Tibi, noting that "the deeper the investigation, the deeper racism and violence go. Netanyahu knew the transfer of Umm al-Hiran was a powder keg and it is no accident that he decided to blow it up today. The prime minister realizes the only way to divert the attention from the investigations against him is to go to war against the Arab public. After the initial battle in Qalansawe last week, today was the official declaration of war."

Frej went on to call the government "racist and criminal, one that bribes Jewish construction criminals and violently evacuates Arabs from homes they've been living in for 40 years. There's no justification to violence, certainly not to running over policemen, but there's also no justification to a violent and racist evacuation of Arabs just so Jews can be settled in their place."

Similar views also came from Zionist Union MK Erel Margalit: "Netanyahu decided, because of the investigations against him, to set the country aflame by demolishing homes in Hurfeish, Qalansawe and in Umm al-Hiran ... anyone who remains silent is an accomplice. Security forces, which operate with such dedication, have become hostages in (Netanyahu's) planned and timed campaign to inflame the tensions and create a smoke screen to hide the investigations."

The Adalah Legal Center for Arab Minority Rights in Israel, which represented the residents of Umm al-Hiran in the legal battle against the demolition, said it sees "the Israeli judicial system and the government of Israel as responsible for the killings in the village."

The center called the Supreme Court verdict, "which allows the demolition of a village that has existed for over 60 years so a Jewish town can be built on its ruins, is one of the most racist verdicts ever made by the Supreme Court. The Israeli government and the prime minister took advantage of the verdict to continue their policy of demolitions, while Netanyahu praises the use of force against Arab civilians in Umm al-Hiran and Qalansawe.

"The Israel Police, in turn, once again proves it views the entire Arab public as an enemy. Their finger is very itchy on the trigger when it comes to Arab citizens and the shooting policemen are granted immunity by the Police Investigation Unit."

Roi Yanovsky and Moran Azulay contributed to this story.