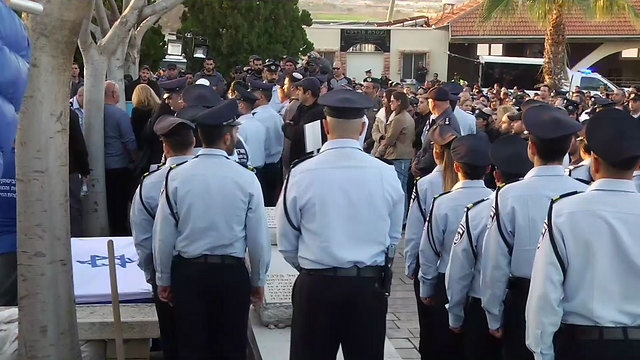 A widow, two small children and family and friends are in mourning following the killing of police officer Sgt. Maj. Erez Levi, in what the police describes as a vehicular attack; hundreds take part in the funeral procession; '"I look at your grave and my heart breaks, just like everyone else's,' says Minister of Public Security Gilad Erdan.

A funeral procession composed of hundreds of mourners accompanied the family of Sgt. Maj. Erez Levi, the police officer who according to police was killed on Wednesday by a vehicular terrorist attack in the Bedouin village of Umm al-Hiran in southern Israel. Police had initially arrived at the village in Israel's southern Negev district early Wednesday morning to carry out demolition orders against illegally constructed homes, creating a human chain—with some mounted on horses—to prevent anyone from entering the village while the planned demolition was underway. That is when police claim the attacker rammed his car in the police force.

The Levi family broke down in tears as family members and friends went up to the podium to wish Levi a personal farewell. "They told me to speak from the heart," said Levi's wife Clara in a voice barely audible from tears. "But how can I when my heart's been taken away? How can I speak when my soul's been taken? How could you leave me?"

Erez Levi (L) and his widow, Clara (Photo: Asaf Magal)
During the funeral, Police Commissioner Roni Alsheikh said that "Everyone knows that the terrorist was a teacher at a school where six teachers have already been arrested." He added that "Murderous acts of terror will not dissuade us. On behalf of the Israel Police and a grateful nation, I salute you. May your memory be a blessing."

Alsheikh was referrring to the arrest of six bedouins from the South of Israel in July 2015, four of whom were teachers, with some of them from the same school as the killed terrorist Musa Abu Alqiya. At the time, the investigation concluded that the six arrested were spreading ISIS ideas amongtheir family, friends and community. The Shin Bet found that they had also begun to spread ISIS doctrine among their students, which included drawing out a map of the Islamic State and teaching them songs of incitement.

Alsheikh praised the conduct of the officers who were at the village when the clash with the protestors began. "I had no doubt what would happen next. They immediately charged and took out the terrorist, afterwhich they carried on with their mission until it was finished. Law enforcement within the Arab sector is a difficult task that requires a great deal of resources. Lately, extremist ideologies have been lumped together and referred to as ISIS. The Arab sector asks for policing and law enforcement while knowing that police intervention comes at a cost. You can't just enforce internal violence. Some leaders in the sector chose to incite violence instead of admonishing the attack."

Alsheikh's words were a thinly-veiled allusion to Arab MKs from the Joint List who clashed with police at Umm al-Hiran following the violence that resulted in Levi's death. The MKs—including Haneen Zoabi, Jamal Zahalka, Ahmed Tibi and Aida Touma-Suleiman—were joined by other protesters who tried to push the policemen away. Some of the MKs claimed several of the policemen hit them in their lower body. The two sides also exchanged shouting.

President Reuven Rivlin also commented on the violence that erupted in the Bedouin village. "We are in the midst of a terrible event where a police officer was murdered, Sgt. Maj. Erez Levi, by a terrorist in a heinous act. In this difficult hour, our hearts are with the grieving family, as we pray for the quick recovery of the injured police officers," he said.

“We must clearly differentiate between a serious terror attack and enforcing the law of demolishing illegal buildings. I turn to the Israeli leadership, and especially Arab leaders: This is a difficult hour through which we have to work together and do all in our power to calm the mood,” added Rivlin.

"I call on the Israeli leadership in general and Arab leadership in particular: these are difficult and stressful times, and we must all work together and do all that we can to calm people down, in both words and actions." He concluded by saying that "We must address reality and draft a solution to this pressing national, social and civil issue, before it is too late."

Minister of Public Security, Strategic Affairs and Minister of Information Gilad Erdan (Likud) was also in attendance. "I look at your grave and my heart breaks, just like everyone else's," said Erdan. He added that "Violence and terrorism will not win out over the law. I hope this day will not mark a turn in the bedouin population's relationship with the state. If it will, MK Ayman Odeh will have been substantially influential in this."