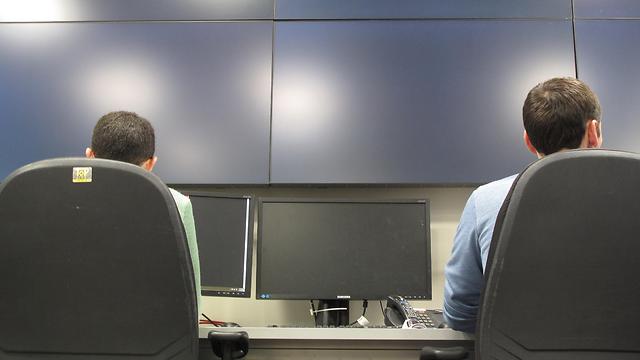 A look at the Shin Bet's Cyber Unit

The Shin Bet has drastically expanded their Cyber Unit to include more young people and make the working environment more comparable to a modern hi-tech company. However, the stakes are real and the unit is at the forefront of Israel's defense.

Details of a planned massive cyber attack against Israel, in which hackers would take over television and radio broadcasts, have been revealed to Yedioth Ahronoth. The goal was to induce public panic, but the attack was ultimately foiled by the Shin Bet's Cyber Unit.

Shin Bet agents tracked the hackers, studied their techniques and took note of their "working hours" before launching a virtual counterattack in which agents leaked personal details of the hackers online.

The offices of the Shin Bet's Cyber Unit, which are fully staffed around the clock, look more like corporate hi-tech offices and are decked out with espresso machines, Playstation, Xbox, colorful designs, sofas and inspirational quotes on the walls.

The designs of the offices are meant to attract quality young people and are comparable to the work environments made famous by Google or Facebook. "We are fully staffed because we have an advanced work environment, good and steady pay, and we offer something that no one else can: operating in an exciting environment, having authority and conducting the most advanced operations that few can even imagine," said a Shin Bet official.

15 years ago, roughly 4% of the Shin Bet's manpower was engaged in cyber and SIGNIT. However, today, 25% of the organization's manpower is dedicated to the virtual realm.

With such an aggressive expansion, the average age of an employee is down to 34. "What brings success or failure is the people," noted the official proudly.

However, recent successes have created another problem in which these same young people are leaving the Shin Bet to pursue more attractive private-sector positions. "Of course we are taking steps to ensure that the sensitive information and knowledge does not leak. It's part of the reality and sometimes we gain from it. We get calls from people in Silicon Valley who haven't forgotten where they came from and offer us amazing technology."

In fact, the Shin Bet are so proud of their Cyber Unit that they have elected to participate in the Cybertech 2017 conference and will demonstrate some of their abilities. The conference is considered the second largest event in the cyber world. Prime Minister Benjamin Netanyahu will open the conference, which also be attended by Police Commissioner Roni Alsheikh, Governor of Michigan Rick Snyder, the head of the National Cyber Bureau, Eviatar Matania and many other leaders in public and private industry from all around the world.