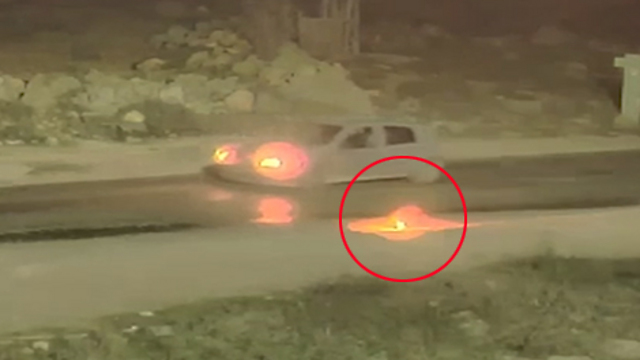 IDF and Police forces of the Judea and Samaria Division arrest three Palestinians suspected of throwng Molotov cocktails at settlements in the Gush Etzion area; 60 Palestinian suspects have been detained in the past year for similar activity.

IDF forces from the Judea and Samaria Division along with Israel Police forces have arrested three Palestinians on suspicion of throwing Molotov cocktails at the entrance of Kibbutz Migdal Oz in Gush Etzion over the weekend. No injuries were reported.

In footage released by the IDF, the suspects are seen approaching the kibbutz at night and hurling several Molotov cocktails at the entrance before fleeing.

Utilizing Police and Shin Bet intelligence, Givati forces raided the homes of the suspects in Beit Fajjar and detained them for questioning.

The Renault vehicle used in the attack was seized as part of new security policy in which vehicles used in the commission of terrorist attacks are confiscated.

The IDF has recently increased anti-terror activities in the eastern sector of Gush Etzion following increases in Molotov cocktail and stone-throwing attacks on Israeli settlements and vehicles. Sixty Palestinian suspects have been detained in the past year for such activity.