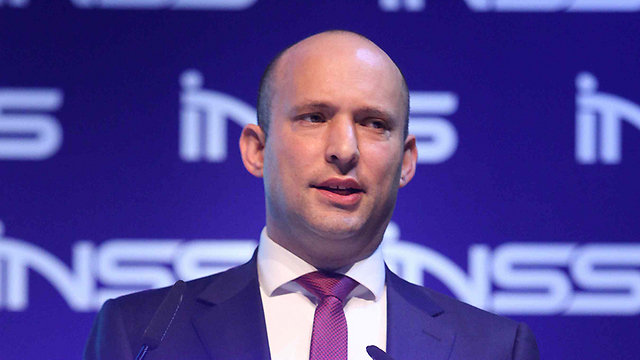 Following publication in Yedioth Ahronoth of transcripts from cabinet meetings during Operation Protective Edge, reflecting ministerial and military infighting, Bennett scolds the ‘rigidity of the state leaders which is the root cause of the failure’; Ya’alon, who directed the incursion, strikes back, accusing Bennett of political point scoring and crossing red lines.

Education Minister Naftali Bennett (Bayit Yehudi) scolded the decision making process during Operation Protective Edge Tuesday morning, prompting Moshe Ya’alon, who served as the defense minister during the operation’s execution in 2014, to issue a scathing rebuttal, implying that Bennett was merely interested in political point scoring. “Leadership doesn’t do politics at the same time as military evaluations,” Ya’alon said during a conference at the Institute for National Security Studies (INSS). “I see once again this morning politicians who have no red line.”
Bennett speaks at the INSS conference    (מכון למחקרי ביטחון לאומי)
X

Bennett speaks at the INSS conference

Speaking in Hebrew and in English before Ya’alon, Education Minister Bennett praised the recent decision to publish a report on Protective Edge, saying that it while it constituted a “security earthquake”, it also represented an opportunity. The comments came in the wake of of a transcript of cabinet meetings during the incursion published in Yedioth Ahronoth, Ynet’s sister print publication.

The report, Bennett said, created a clear picture. “The rigidity of the thinking of the state leaders is the root of the failure,” Bennett declared. “We need to say directly that the rigid security conception crashed, and we need to start thinking about security in a new way. We don’t need more rigidity and shuffling but rather victory—clear and absolute victory. Victory that does not necessitate explanations and excuses. Victory that does not necessitate public relations, but rather which speaks for itself without words.”

Bennett warned against conducting wars or operations lasting 50 days which conclude in a stalemate or draw. Reiterating the need for the security apparatus to detach itself from the rigidity which he says governs its decision-making process, he urged new initiatives. “We need to give the IDF a clear objective of victory. When that is what is required, that is what we will do. Victory is not just an empty word. Victory is the sole objective of the army that enters the battlefield,” he continued.

Naftali Bennett (Photo: Chen Galili)
The security of Israeli civilians is depends on Israel’s ability to emerge victorious once again, Bennett said before calling on Prime Minister Netanyahu to convene a security cabinet session in order to discuss the lessons to be drawn from the operation. The minutes of the cabinet meeting published in Yedioth Ahronoth demonstrate a general lack of preparedness for the tunnel threat, squabbling among the military echelons and serious feuds between ministers. Speaking immediately after Bennett, Moshe Ya’alon went on the offensive, insisting that leadership is not concerned with the possible publication of reports, including those heaping criticism on decisions. “Leadership is not led by polls,” he declared. Admitting that decision-making and evaluations during Protective Edge were difficult, just like in all wars, and lamenting the loss of life and irreparable changes to people's lives in its aftermath, the former defense minister insisted that “We were ready to thwart the serious attacks that were planned by Hamas against our civilians.” The ceasefire was achieved, he said, on Israeli terms. “Since then Hamas has been weakened and deterred, the south has enjoyed unprecedented quiet for the past two-and-a-half years since the operation,” Ya’alon continued in an attempt to list the achievements of a war of which he directed.

“This is an example of responsible and considered leadership,” he said before implying that politicians had no red lines.

He also stated his opposition to the leaked quotes from the cabinet meetings. “Whoever did this is not suited for leadership. Leadership is saying and deciding what is the correct thing to do rather than what is popular at the time.”

Turning to the unresolved crisis of Amona, Ya’alon said: “Leadership should have said to the residents of Amona that no law can pass that leaves you on the mountain peak.”

The media, he added, needed to conduct some self-reflection, particularly after the publication of alleged quotes of conversations between Prime Minister Benjamin Netanyahu and Yedioth Ahronoth owner and publisher Arnon Mozes. “Reliable public broadcasting is extremely important.”

In what appeared to be an implicit slight against Netanyahu, Ya’alon criticized scaremongering, as he continued to list what he believed to be the fundamental qualities for a leader.

“Leadership does not scare a nation about external threats. Leadership needs to unify a nation at the same time as integrating all elements of its society.”

He further expressed his dismay over the Israeli right being presented as racist and violent and the left’s portrayal as a treacherous entity.