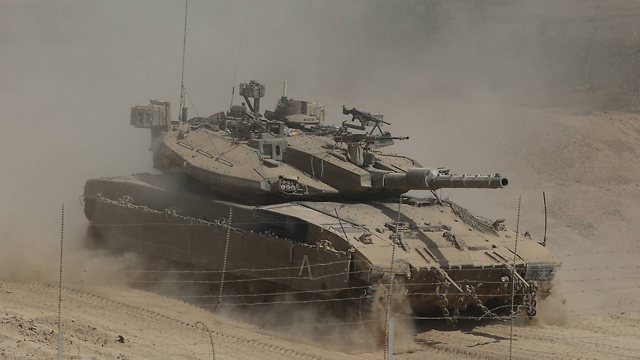 Protective Edge report: 'Mockery made of our children's lives'

In light of the Security Cabinet's charged deliberations during the operation, the state comptroller's subcommittee to postpone the publication of the complete report; bereaved parents: 'The publication is our children's unwritten will'; former Minister Peri: 'Everyone did their duty.'

The top-secret State Control subcommittee convened to approve the findings of the state comptroller's report for Operation Protective Edge, including the parts dealing with the Security Cabinet's performance during the operation, but decided to postpone the vote due to "security issues."

The discussion was conducted on the backdrop of Yedioth Aharonoth's exposure of the Cabinet's transcripts from the operation.

'It is important the faults are amended.' (Photo: Ido Erez)

"Two years have passed since the end of Operation Protective Edge, and we stand here for the first time to ask for the publication of the operation's report", said the parents. "We would like to clarify that the petition was signed by over 50 bereaved parents. We do not have, nor have we ever had any political affinity with the various parties. We ask to have the report published in its entirety. We are certain that the comptroller and his team have done a professional job in examining the different aspects of the campaign".

The bereaved parents also said that "now that the report was submitted to the MKs, we would like to ensure that its conclusions are fully applied in preparation for Israel's future campaigns, hoping there are none. We ask the State Control's subcommittee to recommend the publication of the report, with the exception of censored segments classified by the Military Censor as senisitive to national security. We perceive this to be your moral, national obligation.

The publication of this report is our children's unwritten will. We went on a just war. There was no other choice. Obviously, there are faults in war. It is important to us that they are amended. Any idiot shooting a missile can start a war here, which is why we must prepare for the next war by learning our lessons. We will be following the committee's deliberations and decisions, the implementation of the lessons. If the government does not apply the committee's recommendations, we will continue to fight until they are. We are not here to haunt anyone. We want transparency".

The full report is about to be published. (Archive photo: Gil Yohanan)

Following the exposure of the Cabinet's charged deliberations during Protective Edge, Ilan Sagi, Sgt. Erez Sagi's father, who was also among the fallen in a Gaza operation, told Ynet, "We were aware of this on the day we were told of the horrible disaster that had befallen us. This is why a large number of bereaved parents are fighting to have the comptroller's report published in full, and that if there are any conclusions, that the lessons are implemented and applied".

He also said, "it feels like a mockery is being made of our children's lives, and that is something that we cannot ignore or overlook. We are not looking to overthrow or reinstate governments; we are here to amend the situation so that those future soldiers continue to be our soldiers instead of just a name in a bereaved family".

Sagi was asked whether he could imagine that the military's command centers would not be prepared when sending his son to the operation, he said: "No, I never could, and I'm sure neither could Erez. Since he was 15, Erez was devoted to the IDF, he believed in the IDF. When I refused his request to be sent to a military academy, he said to me, 'Dad, in the military academy I will be able to contribute more than going to a regular high school.' He loved the uniform and always said 'there is nothing quite like the IDF'. If he were here, the situation would have truly saddened him".

Former head of the Shin Bet, MK Yaakov Peri (Yesh Atid), also addressed the publication in an interview to Ynet. Peri, who was the Minister of Science and a Cabinet Observer at the time, stated regarding the transcripts that "they only reflect reality, even though the deliberations were long. The transcripts reflect some piquant bits, but they are also essential, especially the ones concerning the tunnels; the military's level of preparation regarding its dealing with the tunnels, and of course it reflects all sides in the matter".

He also said that dealing with the tunnels is "nothing new, the Comptroller said in previous reports. It was known that eventually the prime minister's comments regarding the tunnels being discussed in many prior Cabinet meetings are far from true. The military had the intelligence on the existence of border-crossing tunnels but they did not come prepared with a full operational plan, with alternatives or timetables for the Cabinet, and all of this took place in the midst of aerial attacks or the beginning of Protective Edge".

In response to the question whether the military leadership misfired on the subject of the tunnels, Peri stated "I am not sure misfired is correct. I think that at the end of the day, the assessment, which we now can clearly define as erroneous, regarding how much of an actual threat, or strategic threat, some people would say, the tunnels are to Israeli security, is critical. This was proven in the first few days of the operation, when terrorist cells infiltrated through the tunnels and initiated attacks; Moreover, the size, length and number of tunnels proved they are indeed a strategic threat and that this assessment was lacking".

Peri also said that "the battles, if one may call them that in reference to the Cabinet, the relationship between Liberman, the prime minister, Bennett, Ya'alon were not quite amicable. At the same time, it seems like someone was trying to misappropriate his duty. Everyone did their jobs including the IDF, the Shin Bet and other intelligence officials, and we must understand that the main problem is that the operation culminated in nothing. We lost our best sons, and we have yet to rehabilitate, demilitarize, advance politically, strategically or internationally".

On the exchange between Bennett and Ya'alon, Peri said "there were some harsh exchanges. The exchange stemmed from the fact that Bennett started his own information gathering operation by directly contacting field officers, which is usually not done, but in order to justify his actions, Bennett said 'since I am not getting accurate reports from you, I need to gather them myself'. I don't think self gathering is the right thing to do. I also don't think Bogie was untruthful. The unwillingness to be more aggressive and commence a ground offensive undoubtedly garnered debate and the kind of expressions that are somewhat inappropriate for such a forum".