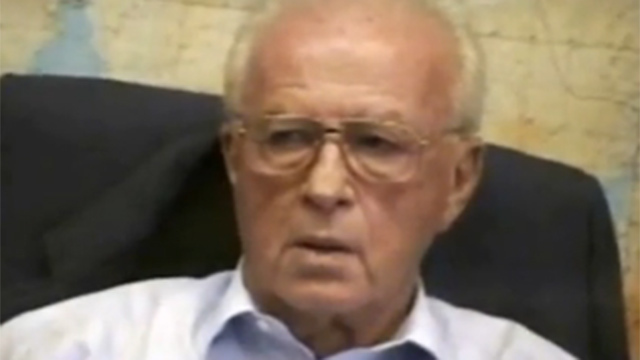 A documentary film that premiered in New York last month unveils a chance encounter between Rabin and Nasser mere months after the founding of Israel.

NEW YORK—In the midst of a furious Middle East war nearly 70 years ago, a group of Israeli and Egyptian officers put down their guns, ate lunch together and discussed the prospects for peace in the region, according to a documentary film that premiered in New York last month.

The group included two men who would become leaders of their respective countries and fierce rivals - Yitzhak Rabin of Israel and Gamal Abdel Nasser of Egypt. But on that day, the young officers interacted warmly and forged at least a modicum of trust.

The details emerge in a 1994 interview with Rabin, then prime minister, that is the centerpiece of "Shalom Rabin," director Amos Gitai's new film about Rabin's bid for peace with the Palestinians.

Yitzhak Rabin (Photo: IDF archive)
In the film, Rabin says that based on the chance encounter with Nasser months after Israel's founding in 1948, he had high hopes Nasser's overthrow of Egypt's monarchy in 1952 would lead to Arab-Israeli peace. Rabin says Israeli officers invited their Egyptian counterparts after surrounding their brigade at the Faluja enclave. Rabin was a leader of the elite Palmach fighting force.

"He (Nasser) was a major. I was a lieutenant-colonel," Rabin says. "We offered them to come and have lunch at (Israel's) Kibbutz Gat and they came."

The Israelis gave their word the Egyptians would return to their brigade safely.

"Nasser was sitting next to me. He looked at the emblem of the Palmach and asked me what it meant and I explained. Then he told me the war we are fighting is the wrong war against the wrong enemy at the wrong time. And I remembered that, because he didn't say it in private." "And I believe at that time that we were very close to peace," Rabin says. "And what happened happened, and he went the opposite direction. I guess the road is much longer than we would have wished," Rabin says. As army chief in the June 1967 Arab-Israeli war, Rabin defeated Israel's neighbors including Egypt, led by Nasser, who had amassed tens of thousands of soldiers in Sinai near Israel's border. Nasser, who died in 1970, acknowledged in his war diaries that an Israeli officer approached Faluja in an armored vehicle with a white flag and it was agreed the two sides would meet the next day, Nov. 11, 1948, at Gat. In diaries his daughter Huda compiled into a book called "60 Years Since the July 23rd Revolution," Nasser wrote: "We were well-received. We met with the Jewish commander who said that he wishes to stop the bloodshed and that our situation is desperate. He asked for us to surrender. The Egyptian commander objected and he asked to pull out to Gaza or Rafah but the Jews refused and said they would agree on one condition: that the Egyptian army withdraw from all of Palestine. "We asked for the evacuation of the wounded to Gaza but they rejected that and said, 'We're willing to give you the medicine you need,' and finally we left. They offered us orange juice, oranges, sandwiches, chocolate, candy and biscuits." The diaries do not mention the commander or Rabin by name, and Nasser's daughter could not be reached this week for comment. Israel's southern commander at the time was the late General Yigal Allon. Nasser's successor Anwar Sadat signed a 1979 treaty with Israel. He was assassinated during a 1981 military parade by an Islamist army officer opposed to the treaty, which remains in effect. A Jewish gunman opposed to peace moves with Palestinians assassinated Rabin in November 1995. Israeli-Palestinian peacemaking has been gridlocked since 2014.