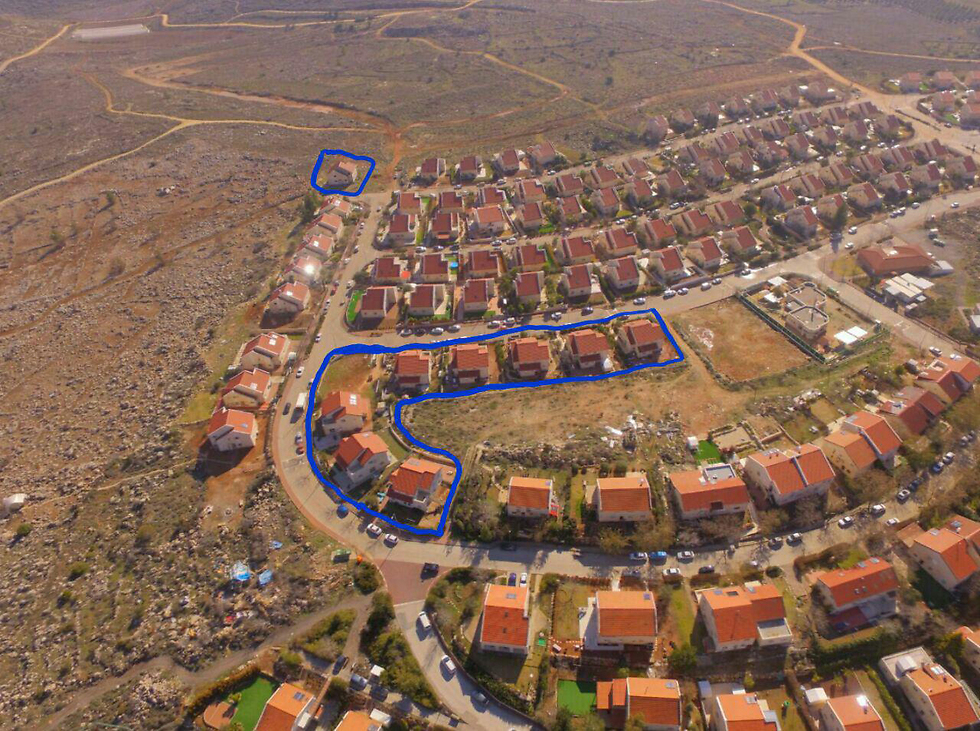 Court rejects settlers' request to postpone demolition of 9 houses in the settlement by three months, and instead allows for a one month's delay to give security forces time to prepare to carry out the verdict.

After the evacuation of the nearby outpost of Amona, the High Court of Justice rejected Sunday a petition by the residents of Ofra to postpone the demolition of nine houses in the settlement by three months, but extend the deadline "beyond the letter of the law" by a month, to March 5.

In February 2015, the High Court determined the nine houses were built on privately-owned Palestinian land and set a two-year deadline for the state to demolish them. But last week, the settlers petitioned the High Court asking to postpone the demolition order.

In its response to the High Court, the state recommended to postpone the evacuation and demolition of five of the houses until the end of April.

The nine homes in Ofra (Photo: Ofra youth)
The families living in those five houses have bought new homes that would only be ready in a few months. Since they have young children, the state wishes to spare them having to move to a temporary home for such a short period of time.

In her decision, Supreme Court Chief Justice Miriam Naor explained the one month delay was meant to give security forces time to prepare to carry out the ruling.

"Despite the fact the request for a three months extension was denied, we hope that when the evacuation date arrives, the petitioners will evacuatepeacefully, as they have declared in their affidavits. No man has the right to use violence against law enforcement authorities or any other man," Naor added.

Naor stated in her ruling that “There is no disputing the fact these structures were built unlawfully on privately-owned Palestinian land. The construction ... was done while violating cease and desist orders and demolition orders issued by the authorities and was completed in what appeared to be an underhanded move done after the petition (against the construction) was filed.

"This serious and unusual chain of events, which led to the establishment of 'facts on the ground' while violating administrative orders, was a main factor in our decision," she added.

Yesh Din, a legal NGO that helped Palestinian land owners file their claims over the land, said in response: "These homes, which were built on privately-owned Palestinian land, never should have been built or populated. We hope that in the month that's left until the evacuation, we won't see any more repeat attempts to bypass the High Court's ruling."

The Ofra settlers came out against the decision: "The community of Ofra and the families in the nine homes would like to express their disappointment of the High Court's decision to postpone the evacuation by only a month. The court knows this will not be enough time for the families to move into their new homes, which are still under construction. The High Court's judges have shown no sympathy towards the families' feelings, they prolonged the torment caused by needlessly waiting and missed an opportunity to restore trust in the state's hall of justice. We demand the prime minister to complete the legislation process for the Regulation Bill tomorrow and immediately apply it to free the settlement enterprise from the grip of persecution and destruction by the radical left wing, which is cooperating with our enemies while using the High Court."

The Ofra secretariat met with Bayit Yehudi Ministers Naftali Bennett and Ayelet Shaked on Saturday night, but not all in the settlement welcomed them. Some residents left the meeting yelling at the ministers: "We elected you so you can fight, not so you can cave in to Bibi (Prime Minister Netanyahu). A disgrace. Shame on you." Bennett responded coolly: "Have a good week, love you." During the meeting, Bennett and Shaked talked about their plans to bring the Regulation Bill—which would retroactively legalize outposts built on privately-owned Palestinian land—to a second and third reading at the Knesset this week and promised to work for the settlement's expansion.

A protest rally is scheduled for Sunday afternoon against the planned demolition of the houses. The rabbis organizing the protest rally will also call on the government to pass the Regulation Bill.

One of the houses set for demolition is that of Netzah and Esther Brot. Unlike Amona's caravans and temporary homes, the Brot family's house is a large village with sculpted wooden doors, a modern kitchen and a back yard with fruit trees and a swing set.

"We moved here nine years ago, long before the Palestinians petitioned the High Court to have the houses demolished," said Netzah, a 32-year-old lawyer who specializes in international taxation. "We never imagined that our house—located in the middle of a 40-year-old community with 700 families—would be demolished."

Esther and Netzah Brot with two of their children at their home in Ofra (Photo: Ohad Zwigenberg)

The couple came to Ofra six months after they wed, not because of an ideology but because of the quality of life.

"We're not even interested in politics," said Esther, a 31-year-old architect. "We were looking for community life, culture, a good education for our children. We love this place because of its vast spaces and mostly because there's no humidity here. We know that to live in Ofra, you have to have a particular sort of ideology, but we never imagined that we would buy a house in a bourgeois community and find ourselves facing evacuation."

"We're going through terrible upheaval and feel like we're being played," Netzah bemoaned.

The Brot family has already started packing. "We didn't have to see what happened in Amona to realize an evacuation here was not an unlikely scenario," Esther said. "Our struggle is not just for our own personal home. There are over 500 houses in Ofra under the same status, but no petition has been filed against them yet. In Gush Katif, the evacuation was political—a government decided to leave the territories. Here, it's a judicial evacuation. Radical left wing organizations who didn’t win at the polls have turned to the High Court to promote their own disengagement plan."

The couple has three children: 10-months-old Uri, five-year-old Shir and 6.5-year-old Noam. "You can't explain to the children the complexity of this story," Esther said. "On the one hand, the decision was made by the High Court. On the other hand, I don't see the court as a hostile element. On the one hand, the state is evacuating my children from their birthplace. On the other hand, I want them to join the army and serve the country."

Her husband promises, however, that the family won't violently resist the evacuation. "We have no intention of forcefully resisting the evacuation or taking violent measures," Netzah stressed. "We'll express our protest using legitimate measures."

"The police officers won't have to take us out of here. I have no quarrel with them. We'll fight against the High Court’s decision and the government’s policy."

Telem Yahav contributed to this report.