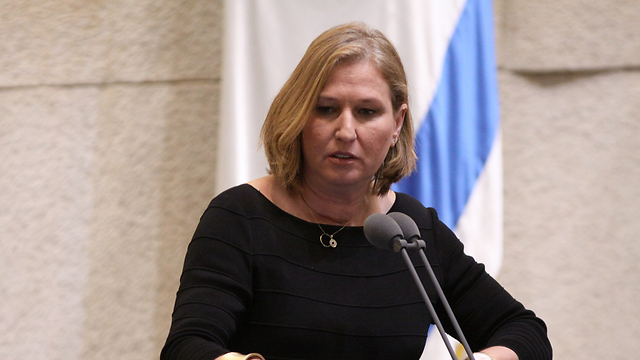 Guterres considering offering the former Israeli foreign minister to be Under-Secretary-General in return for the US withdrawing its objection to the appointment of former Palestinian PM as the UN's special envoy to Libya.

UN Secretary-General António Guterres is considering appointing Israel's former foreign minister Tzipi Livni (Zionist Union) to a senior position in the United Nations at the rank of Under-Secretary-General in return for the US withdrawing its objection to a Palestinian appointment.

Over the weekend, US Ambassador to the UN Nikki Haley blocked the appointment of former Palestinian prime minister Salam Fayyad to lead the UN political mission in Libya.

Seeking to resolve the crisis, Guterres has offered to appoint Livni to the senior post if the Americans remove their objection to Fayyad's appointment.

Tzipi Livni (Photo: Knesset Spokesman's Office)
Guterres has reportedly spoken to Livni over the weekend and discussed the appointment with her. Sources close to Livni said the appointment has not been officially offered to her. It is unclear, however, whether Prime Minister Benjamin Netanyahu would allow such a solution, as this would mean the promotion of one of his staunchest politician opponents. Under-Secretary-General (USG) is one of the highest ranks in the organizations, which can be given to a wide variety of position holders. Among the positions reportedly being considered for Livni are Under-Secretary-General for Public Information or a special UN envoy, among others.

UN Secretary-General António Guterres (Photo: EPA)
Fayyad's planned appointment angered both the Americans and the Israelis, particularly as the secretary-general's letter mentioned in parenthesis that Fayaad was a representative of "Palestine."

US Ambassador Haley said the Trump administration "was disappointed" of Guterres's intentions to appoint Fayyad. "For too long the UN has been unfairly biased in favor of the Palestinian Authority to the detriment of our allies in Israel," Haley said. She added that the US does not recognize a Palestinian state and does not support the message Fayyad's appointment would send. Israel's UN Ambassador Danny Danon welcomed the American statement, saying "This is the beginning of a new era at the UN, an era where the US stands firmly behind Israel against any and all attempts to harm the Jewish State." Dan Shapiro, until recently the US ambassador to Israel, criticized the American move to block the appointment, calling it "stunningly dumb."