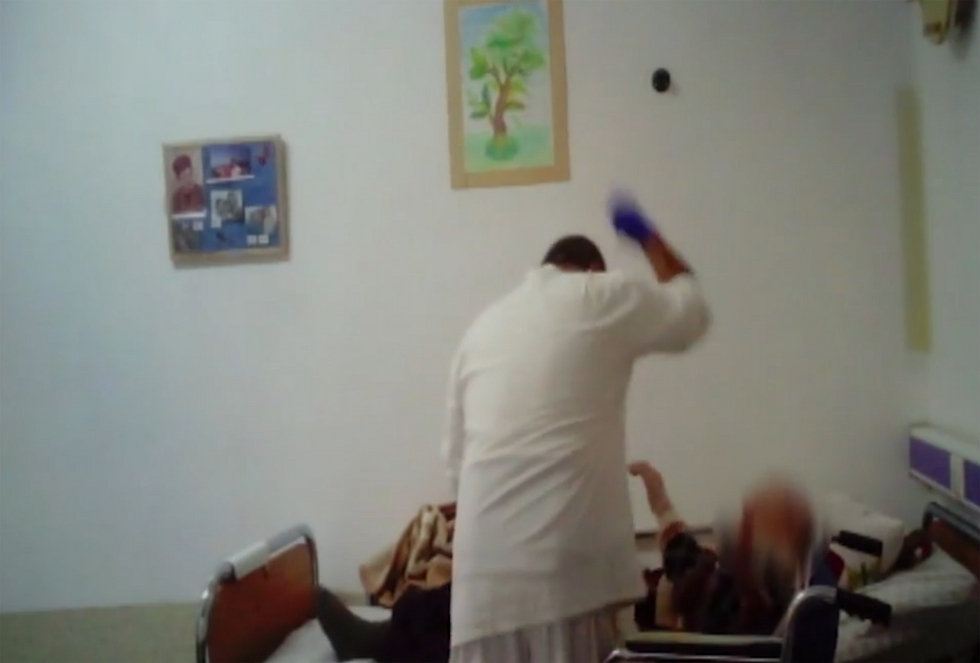 The remand of four caregivers suspected of abuse in a Haifa nursing home has been extended while the home’s director has been fired; images evoke anger from Prime Minister Netanyahu: ‘This goes against all our Jewish values and the basic values of the State of Israel’; cameras installed in bedrooms of home’s residents.

Police arrested five employees of a Haifa nursing home on Sunday in an investigation that has been launched into the abuse of elderly residents.

Several more arrests are expected to be made in the coming days, following footage which surfaced showing graphic instances of abuse and negligence of defenseless elderly people residing in the home.

Police also intend to investigate the circumstances surrounding the death of one of the elderly residents.

Ever since the police investigation was uncovered, following a footage captured by Channel 2, showing 2 employees striking and physically mishandling elderly residents, police gathered evidence from the nursing home and questioned personnel as well as family members of the residents.

On Sunday, the Haifa District Court extended the remand of the four arrested caregivers—Sergey Mitrohin, Andrei Kis, Peter Gaskov and Husam Abu Ahmad. All are suspected of carrying out physical and mental abuse on their wards.

The head nurse in the nursing home, Irena Yagodin, 67, is suspected of failing to report the cases. While the court ruled that she may be released from custody, the police appealed the decision and a discussion of her case is set to take place on Monday.

Health Minister Yaakov Litzman decided to cast responsibility on the nursing home's directors and demanded their resignation. In addition, all employees captured on camera, abusing patients, are set to be fired as well.

Litzman decided to issue a temporary closure order to the nursing home and ordered cameras to be installed in all nursing homes, if legally approved. He also asked his staff to perform random visits in ten senior citizen homes and personally notify him of their findings.

"I am shocked at what I have seen," said Litzman in conversation with Ynet, "every person should think that this could have been their grandfather or grandmother. This will not be ignored. This place will no longer be as it was. We will not settle."

Ministry of Health Director General Moshe Bar Siman Tov wrote in a post that "there is burning and justified public anger and we need to channel it to improve the situation." He said that the investigation and the horrific footage "turns one's stomach. It's sadism and brutal abuse."

"In the last 48 hours, even before the investigation, we performed an immediate audit in the facility and summoned the directors to a hearing. Sixteen Ministry of Health board members joined the professional teams to perform random check-ups in dozens of centers," Bar Siman Tov continued.

"Dr. Vered Ezra, Head of the Medical Administration, and I joined the health minister in visiting the site. We walked around the departments and spoke with the patients and their family members. We need to get to the bottom of this, to understand the systemic failure. We need to take this opportunity and utilize it for an overall improvement and not just wrap up this event with localized penalization," he concluded.

The MoH director general also stated that "a systemic solution requires large funds to enable the addition of more qualified personnel. It is difficult to provide good service when a ward consisting of 36 residents only has one night nurse and one caregiver. And beyond that—I am sorry to say that too many people in this line of work are doing this for lack of choice."

The director added that there was a need to change the situation, and that only additional resources could remedy the problem.

"We also want and can make it possible for more elderly individuals to receive better care at home so they don't need to go into nursing homes. The Israeli public is willing to pay more money knowing it's geared to a better healthcare system, which would then spare private expenses."

According to Bar Siman Tov, a solution for the nursing homes' problem would require "a moderate raise in health insurance fees. I've said these (unpopular) things in many different forums—we have to raise health insurance. The Israeli population is getting older and we are not nationally prepared for that. What we've seen over the last few days is a wakeup call for everyone."

Prime Minister Benjamin Netanyahu addressed the issue in a cabinet meeting: "We read in the weekly Torah portion—'Honor your father and your mother, so that you may live long'. In our heritage, the Jewish heritage, we have some other sayings like, 'Do not cast me away when I am old' and 'respect our elders,' which is why I was shocked to see these pictures of the elderly abuse," he said.

"This goes against all our Jewish values and the basic values of the State of Israel. I expect the Ministry of Health and law enforcement to bring the abusers to justice and ensure that such cases never recur."

The Haifa nursing home also issued a statement on Sunday, expressing its outrage and shock against the images.

"We are shocked by the horrifying footage and understand the anger felt by many. The facility's management is working in tandem with the police and the Ministry of Health. A hearing is set to take place today at the Ministry of Health. The nursing home submitted all of the relevant information, including the addresses of the abusive employees, in order to assist in the arrests. We also started installing cameras all over the nursing home, including in the patients' rooms. As per the request of the Ministry of Health, the patients' families were asked to approve the installation of the cameras in the rooms."