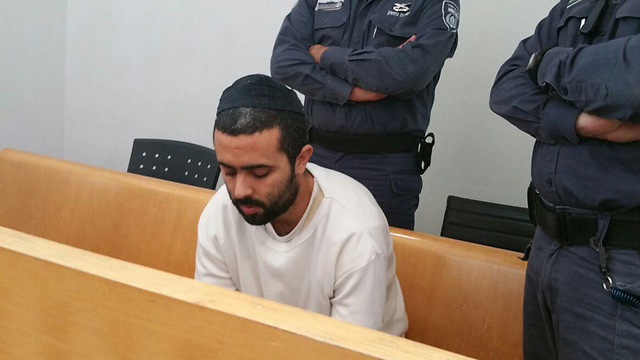 Judges determine that Shlomo Pinto should receive a sentence consistent with what a terrorist would get for attempted murder due to the severity, premeditated nature and nationalist motivation of his crime.

A Jewish Israeli man was sentenced to 11 years in prison on Monday for attempted murder after he stabbed a man he mistook for an Arab at a supermarket in northern Israel in 2015. Pinto was also ordered to pay damages of NIS 50,000 to the victim.

In their ruling, the Haifa District Court judges said that the perpetrator, Shlomo Pinto, "acted out of a sense of revenge and ideology in order to inspire people to act like he did, when the only goal is to kill an Arab victim."

Pinto, a resident of Kiryat Ata who had a police record for a series of property crimes, was convicted in December of attempted murder.

The attack took place in October 2015 during the height of a wave of stabbing terror attacks that swept the country.

Pinto entered a supermarket in Kiryat Ata armed with two knives. After observing Uri Rizken, a worker at the supermarket, Pinto concluded he was Arab and stabbed him several times in the back and waist before chasing him through the store and seriously wounding him.

Pinto admitted to his crimes, but the question swirling around the trial was the matter of Pinto's sanity. Judge Tamar Naot-Peri noted in the verdict that the defendant's claims of hearing voices only surfaced during the investigation two weeks later.

In handing down the verdict, judges noted the premeditated nature of the crime, its severity, the nationalist motivation and the damage done to the victim. As such, the judges handed down a sentence consistent with that given to terrorists also convicted of attempted murder (between 9 and 15 years of actual time spent in prison).