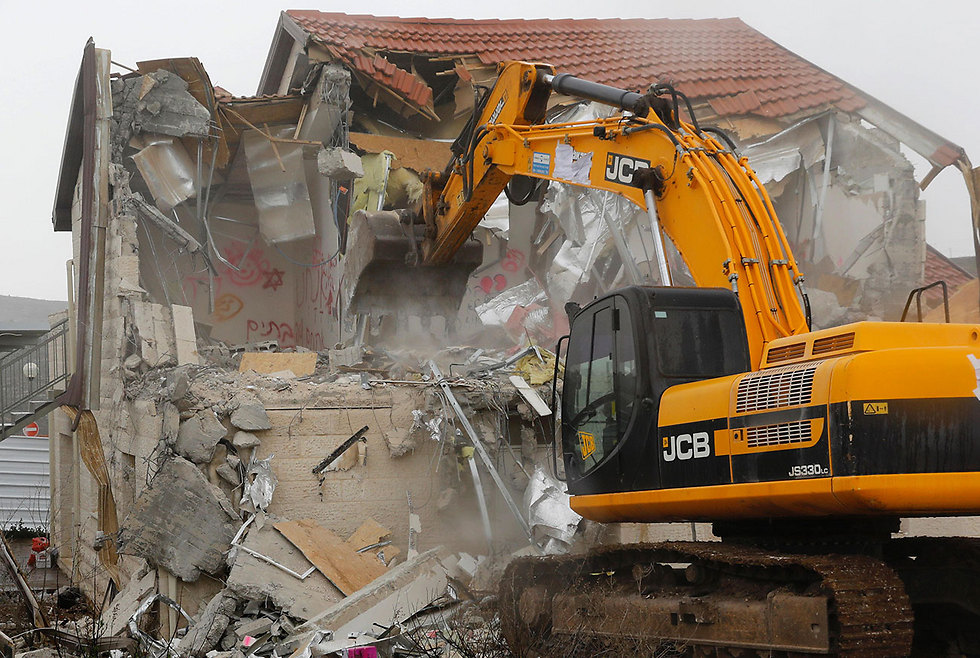 After a last stand by about a dozen youths on the roof of one of the houses under the threat of demolition, the evacuation of the residents of Ofra, whose houses are built on Palestinian lands, is finished; evacuated resident laments: 'I lost my home.'

The Israel Police on Wednesday at noon finished evacuating the last of the nine houses in the settlement of Ofra built on privately-owned Palestinian land and proceeded with the demolition of the homes.

The evacuation and demolition of the nine illegally built houses in Ofra began on Tuesday, after the High Court of Justice accepted a petition by NGOs B'Tselem and Yesh Din.

After the last of the resisting youths was taken down from their last stand on one of the rooftops, the go ahead was given to continue demolishing the houses.

Tut Atun was just four years old when she and her family were evacuated from Yamit. Thirty-five years later, she finds herself in the same situation being evacuated from her home in Ofra.

"I feel like I'm being accused of theft without any proof, and I'm losing my home because of it," she said.

Photo: AFP
In 1982, Atun and her family were evacuated following a peace treaty with Egypt, but now, she claims, it's completely different. "Did anyone see proof to support the ruling that this is privately-owned Palestinian land? The High Court ordered the homes to be demolished, as if we lack other simple and humane solutions to this problem. There are tales of the king of Jordan who distributed lands, but they (the Palestinians) never used them, and now thanks to aerial photos they're demolishing my home," she said.

Atun claims she was wronged, saying "I don't think that you'll ever need to explain to someone the feeling of losing a home. You feel detachment, like you are being wronged. There is this cynical situation here.

"We have experience with this already. When my parents evacuated their home, they were so naïve, truly believing that the withdrawal from Sinai Peninsula can be stopped. Today, we can't afford to be this naïve."

Police clarified that the Ofra evacuation, just like the Amona evacuation, was completely transparent and announced beforehand and lacked any sort of violence by the security forces involved n the evacuation. Additionally, they claimed that there were cases of violence, but those were of the residents toward the officers – especially when it came to the last house.

During the operation, 15 people were arrested for attacking police officers, 10 of whom were arrested during the evacuation of the last house. One was jailed for head-butting an officer in the face.

A total of 21 officers were lightly injured, some of them were treated at the scene and returned to duty shortly after, while others were taken to the nearby Hadassah Medical Center for further treatment.