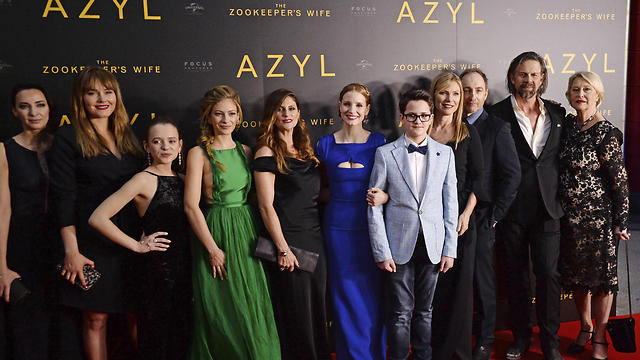 Hollywood film on couple who saved Jews premiering in Poland

The Zookeeper's Wife premieres in Warsaw showcasing a glamorous cast; the movie tells the story of the former director of the Warsaw zoo, Jan Zabinski, and of his wife, Antonina, who jointly saved up to 300 Jews during World War II.

Hollywood actress Jessica Chastain and the female director of her new movie are celebrating both the strength and the tenderness of women.

Chastain, director Niki Caro, and other actors were in Warsaw Tuesday for a gala screening of the movie The Zookeeper's Wife.

It tells the real-life story of the former director of the Warsaw zoo, Jan Zabinski, and of his wife, Antonina, who jointly saved up to 300 Jews by hiding them in their home on zoo grounds and in animal enclosures during World War II.

'The Zookeeper's Wife' premiere in Warsaw, Poland (Photo: AP)
Shot in Prague, Czech Republic, the movie opens in theaters March 31. It is based on a 2007 book by American author Diane Ackerman that revealed the story to the world.

Two-time Academy Award nominee Chastain, who plays Antonina Zabinska, told a news conference she felt "so inspired" by the story of human kindness "that we need so much today."

The director (second from the left) and the cast (Photo: AP)

She said it was exciting to play how Antonina, initially unsure of herself, "is left alone at the house and given all this responsibility for caring for all these people and to protect them she grows into herself." By the end of the movie, she is an equal with her husband.

The nicest part, however, was working with the animals, Chastain said, recalling a "little game with apples" she played with a female elephant.

"I would hide the apples round the set and she, with the trunk, would come over and try to find the apples on me," Chastain said. "That was the best part, playing the games with the animals."

Teresa Zabinska, the daughter of Jan and Antonina, said at the gala screening she was happy to see her parents' bravery honored that way, especially her mother, who carried the brunt of the effort.

Caro said the movie turned out to be a very contemporary one, with an important message to everyone.

The Zabinskis did the "right thing," risking their own lives and those of their two children, to "act, to stand up, to act out of the highest vision of ourselves," the director said.

She said she would like to see more female heroes who are genuinely feminine and complex, rather than "Lara Croft guy-characters with sexy bodies."

Both women said they would take part in a march to mark International Women's Day in Warsaw on Wednesday. Actors Daniel Bruhl and Johan Heldenbergh, who also star in the movie, said they will join them.

Earlier in the day, the crew visited the Zabinskis' villa.