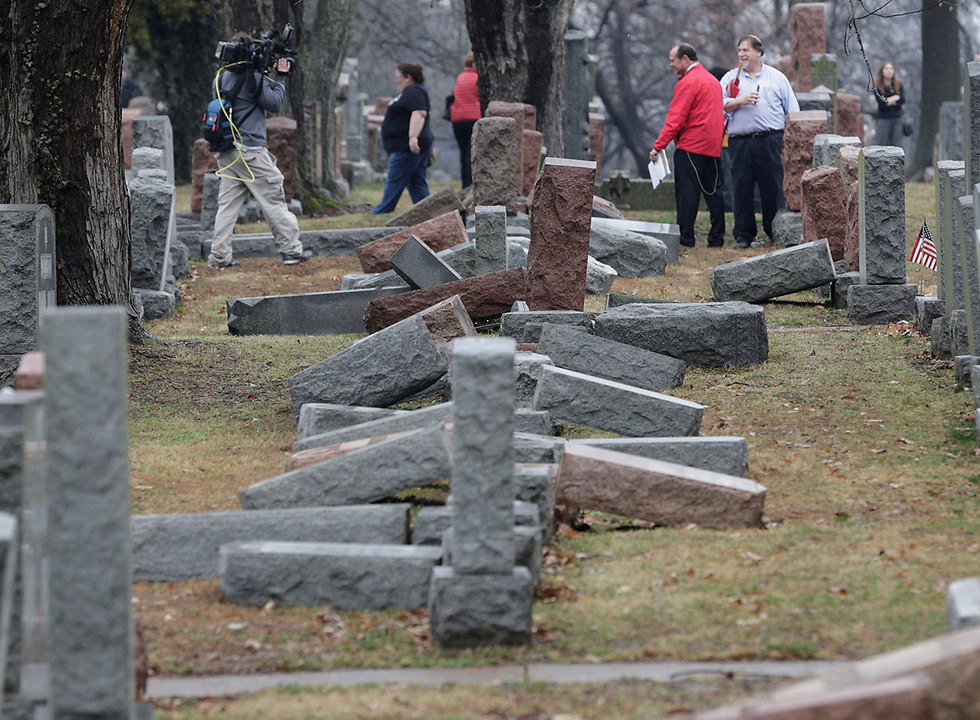 Authorities believe one person could be behind bomb threats

With almost 150 bomb threats being made against Jewish communities in both Britain and the US since January, investigators are making headway, claiming that a large number of the threats could be linked, or even made by one person using a voice changer and phone spoofing device; latest threat made against a Jewish Brooklyn museum on Thursday, leading to its evacuation.

Investigators believe one man using a voice changer and phone spoofing device is behind a large number of threats made against US Jewish institutions this year.

NYPD Deputy Commissioner for Intelligence and Counter-Terrorism John Miller appeared on the show “CBS This Morning” on Thursday and described the attacks as coordinated. The spoofing device makes it appear as though the call is not coming from the number the caller is using, and makes it seem as though it’s coming from within the institution, he said.

The cemetery desecrated in St. Louis (Photo: Reuters)
“We have an offender with some technical prowess here,” Miller said. On Friday last week, Juan Thompson, 31, was the first to be arrested in relation to the wave of threats made against US Jewish institutions this year. He completed a brief court appearance Friday afternoon, and is expected to eventually be transferred to New York for prosecution. “Thompson made a number of threats against Jewish institutions using his ex-girlfriend’s name, as well as other threats in his own name,” said Oren Segal of the Anti-Defamation League. Prosecution says that Thompson, a former New York City journalist who was fired from the online publication The Intercept last year after he was accused of fabricating several quotes and creating fake email accounts to impersonate people, is responsible for at least eight of the threats targeting Jewish institutions.

Juan Thompson. Wanted to get back at his ex
He was charged with cyberstalking, which carries a maximum sentence of five years in prison, authorities said. Despite this, sources in the US and UK Jewish communities say that they believe that Thompson's threats are not related to the larger wave of threats against their institutions.

The Anti-Defamation League (ADL) says 148 threats targeting Jewish institutions have been received across the country since January. Just yesterday (Thursday), a Jewish museum in Brooklyn was evacuated after its management received a threatening email saying that a bomb was planted inside.

A demonstration in Philadelphia demanding President Trump denounces anti-Semitic incidents (Photo: AFP)
The Reuters news agency reported that sources in both Britain's Scotland Yard and United States' FBI say that there is evidence that some of the threats made against Jewish institutions in those countries are linked. Sources from both countries who listened to the recordings of the threats say that in most of them a man or woman with an American accent is heard and that their voice was distorted by a voice changer.