The paper featuring a Hitler-positioned Merkel (L), and Erdoğan 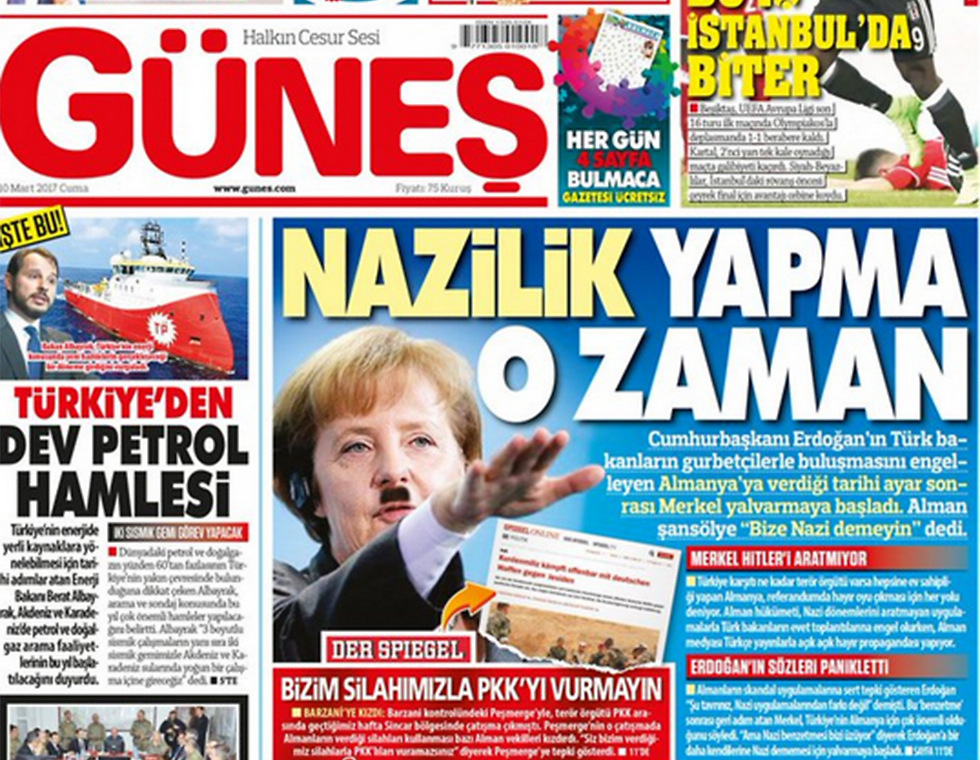 'These comparisons of Germany with Nazism must stop. They are unworthy of the close ties between Germany and Turkey and of our peoples,' says German Chancellor Angela Merkel before Germany's Bundestag lower house of parliament; Turkey's Foreign Minister nevertheless repeats the comparison within hours.

German Chancellor Angela Merkel told Turkey to stop invoking Berlin's Nazi past in criticizing cancellations of Turkish ministers' rallies in Germany, and said she would do everything possible to keep Turkish domestic conflicts from spilling onto German soil. Turkish President Tayyip Erdoğan, who survived an army attempt to topple him in July, is working to win the votes of Turks abroad in an April referendum that would give him sweeping new powers. But unease is spreading in Europe over the dispatch of ministers to communities themselves sometimes deeply divided.

The paper featuring a Hitler-like Merkel
"To the many people with Turkish roots who are German citizens or have lived here for a long time, I say: you are part of our country," Merkel said on Thursday.

"We want to do everything we can to make sure that possible internal Turkish conflicts are not carried over into this life together (here).

"Let us support our way of life together and even improve it where possible. That is a matter of the heart." Some took a harsher line than Merkel. Andreas Scheuer, head of her CSU Bavarian sister party, said “the campaigner Erdoğan and his henchmen" were not wanted in Germany.

The dispute over cancellations has become entangled with other tensions between Turkey and its NATO allies.

West European politicians have accused Erdoğan of using the coup as a pretext for mass arrests and dismissals that stifle dissent. Erdoğan, for his part, accuses European powers of racism, harboring enemies of Turkey, including Kurdish militants, hardline leftists and people linked to the July coup.

Scores of Turks, including diplomats and army officers, have applied for political asylum in Germany, Greece, Switzerland and other countries.

Merkel spoke unusually bluntly in the Bundestag lower house of parliament, calling for the release of a German-Turkish journalist being held in a Turkish prison. She said she was saddened by deep differences between the allies.

Erdoğan's references to Germany's Nazi past were, however, "so misplaced that you can't seriously comment on them".

"These comparisons of Germany with Nazism must stop. They are unworthy of the close ties between Germany and Turkey and of our peoples," she said.

"We are not calling the government Nazi. Its practices recall that era," NTV television quoted Mevlüt Çavuşoğlu as saying.

Austria has proposed an EU-wide ban on Turkish referendum rallies.

Çavuşoğlu said on Thursday he would not succumb to "fascists and racists" like Dutch nationalist politician Geert Wilders, who has called for a ban on Turkish rallies in the Netherlands.

"I will go to the Netherlands, no such obstacle can stop us," Çavuşoğlu told reporters. His comments contradicted earlier reports that he had canceled a Rotterdam rally.

Switzerland declined on Thursday to block the Turkish foreign minister from speaking in Zürich on Sunday, although the Zürich-area hotel where he had planned to appear canceled the event at its facility.

"The Swiss federal government authorities responsible for security matters are of the opinion that Sunday's planned visit of the Turkish foreign minister in Zürich does not at the moment pose an elevated threat to internal security," the foreign ministry said. "Consequently, there are no reasons to forbid the visit."

Zürich officials who had asked for a ban said they were disappointed but would do their best to preserve order, given what they expect will be massive counter-demonstrations.

Erdoğan, a divisive figure but by far Turkey's most popular leader, says the strong presidency is vital to a country threatened by Islamist and Kurdish militant attacks and dogged by a history of unstable coalition governments.