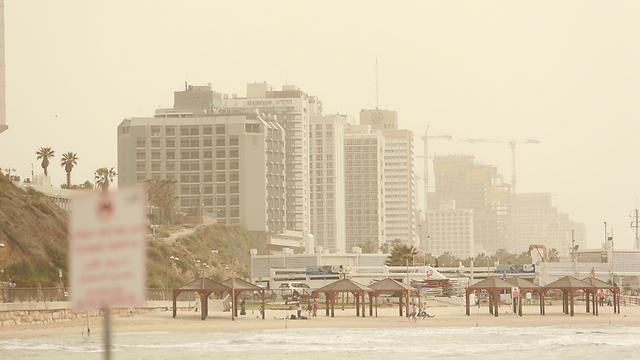 South winds carried sand and dust from Sinai that covered most of the country; An Austrian Airlines flight from Vienna to Ben Gurion Airport had to turn back due to the unusual amount of dust in the air.

The smog that spread over Israel's skies Sunday came from the Sinai Peninsula and is only growing heavier, causing heavy air pollution in most parts of the country and disruption of air traffic.

An Austrian Airlines flight from Vienna to Ben Gurion Airport turned around over the Mediterranean resort town of Marmaris, re-landing in Vienna. Representatives of the airline in Israel told Ynet that "the airplane returned to Vienna following the abnormal amount of dust in the air."

On the backdrop of Purim (Photo: Yaron Brenner)

(Photo: Ido Erez)
Another Austrian Airlines flight from Vienna to Larnaca had also turned around, making an unplanned landing at the airport in Athens. The company said that the airline has a "particularly strict policy regarding safety and when the amount of dust in the air exceeds the norm, the company does not operate its aircrafts. The company apologizes for the inconvenience and will arrange alternative flights for its passengers."

The thick pollution is expected to last into the night. The particle concentration should significantly drop once it starts raining, which is expected to happen overnight.

The Ministry of Environmental Protection issued a warning following the afternoon heavy air pollution spreading from the south to the center and up north.