PM Netanyahu and his wife at court
Photo: Motti Kimchi 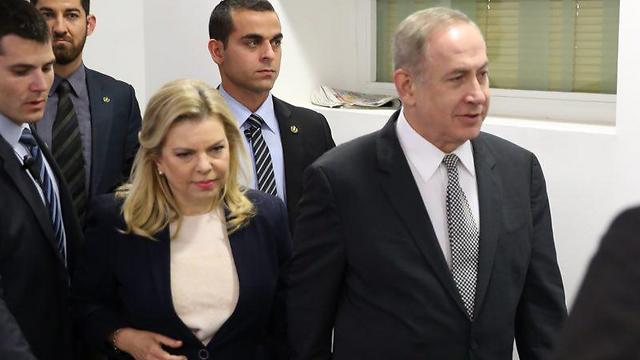 After the court rejected Netanyahu's petition to postpone his appearance for the third time, the prime minister, his wife and the former head of the Shin Bet are set to give testimony in the libel suit against Yigal Sarna, who the PM and his wife say 'attempted to embarrass them publicly by means of ugly and false reports.'

Prime Minister Benjamin Netanyahu provided his testimony in the libel suit against journalist Yigal Sarna at the Tel Aviv Magistrate's Court on Tuesday.

Cohen was called to testify despite the PM and his wife's objection, after Judge Azaria Alcalay ruled that although Cohen’s testimony was not relevant regarding Netanyahu’s conduct, he was head of the Shin Bet during the time in question, and he could testify as long as he kept to the matter of Sarna’s post.

Prime Minister Benjamin Netanyahu and his wife Sara at court, Tuesday (Photo: Motti Kimchi)
Earlier, Alcalay, from the Tel Aviv Magistrates' Court, had rejected Netanyahu's petition to postpone his appearance for the third time. Netanyahu kept claiming that he had other obligations and could not attend, even though he and his wife were the ones who filed the suit.

The suit filed by the Netanyahus involves a Facebook post by Sarna in which he described an incident that took place on the Jerusalem-Tel Aviv highway.

According to Sarna, during the trip, the entire motorcade stopped and the prime minister was asked to get out of the car, while Sara Netanyahu mocked the security arrangements and, furthermore, the entire country.

The Netanyahus filed a libel suit for 280,000 shekels against Sarna. They said Sarna had committed an injustice against them in a manner that was “disgusting, cynical, low, mean and inordinate,” in an attempt "to shame the plaintiffs, revile them and embarrass them publicly by means of ugly and false reports, which have not an iota of truth to them.”

Sarna claims that the suit is an attempt to financially hurt him over a legitimate criticism made by him.

In his testimony, Netanyahu claimed that everything Sarna wrote never happened. He called Sarna's claim he bossed people around and "took control of the (motorcade) security" absurd and beyond slander.

When questioned on whether Netanyahu addressed in his suit the entirety of Sarna's writings against him, Netanyahu said that one could argue that in the past, his writings could just be considered "zealous criticism," even when Sarna called him a "poisonous mushroom that grew in Rabin's puddle of blood," but when he outwardly lied and displayed it as fact, especially in a Facebook post, he crossed a line.

When Sarna's lawyer made a comparison between Sarna's post and Netanyahu's Facebook post saying that the Umm al-Hiran driver was a terrorist, Netanyahu clarified that unlike Sarna, who didn’t ask for a comment from him or even notified him beforehand, Netanyahu went over his with both the Internal Affairs Minister and the Chief of Police, and if found to be wrong he would apologize.

The prime minister's wife, Sara, claimed in her testimony that she is often targeted to make her husband look weak, pointing out that she had won libel suits in the past. She then noted that if she sued for every lie and slander against her she would have to spend all her time in court.

She claimed to be suing because, as her husband previously claimed, Sarna's post crossed a line.

When asked if she argued with her husband in the motorcade like Sarna reported, she objected to the question, asking if everything that happens during a motorcade needs to be answered for. She then added that she doesn't recall any argument.

Both husband and wife stated that even though they are not currently suing Sarna or any other journalist for any other case of alleged slander, they have not ruled it out and are even considering some.

Sarna then took the stand, and when asked if he is sticking to his post, boldly said, "Today I'm sure it happened, even more than before."

The prosecutor than asked him for the reason why he wrote in his defense that "the post happened even if details were not very accurate, to which Sarna explained that after deliberating with his lawyer, he decided to phrase it in that manner because he could not know for certain how accurate the details were due to the fact that he was not present at the incident."

When the prosecutor questioned Sarna's decision not to publish it in Yedioth Ahronoth, a mainstream newspaper he had been working with for 30 years and Ynet's sister publication, Sarna claimed that it was because "it wasn’t a big story."

In his response to the lawsuit, Sarna said that his Facebook post was an expression of his opinion. He added that what he wrote was “entirely true, published in good faith based on proper and reliable sources, and bearing characteristics similar or identical to known episodes in the Netanyahus’ family life.”

When asked about his sources, Sarna replied that he has "a friend who is a senior official in the Shin Bet," and that he is experienced enough to distinguish between lies and truth, saying that whatever he thinks about the PM, which he admits is not favorable, did not affect his judgment and cannot effect his position in any way.