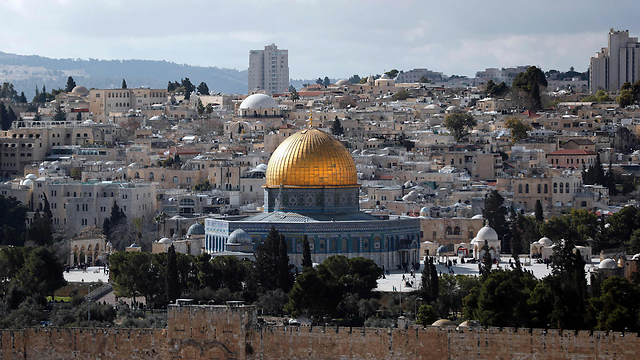 94% of Palestinians: God is with us

A survey shows that one third of Palestinians believe that the occupation will continue for at least another 50 years, 64% believe that Mahmoud Abbas should resign and 51% oppose the two-state solution, but despite the pessimism, the majority believe that God is standing with them. 37% believe that armed resistance is most effective means of achieving an independent state.

The survey was conducted last week in Gaza and the West Bank by the Palestinian Center for Policy and Survey Research, headed by Dr. Khalil Shikaki and the Konrad-Adenauer Center in Ramallah.

Another dramatic statistic revealed that 94% of respondents believe that God is on the side of the Palestinian people; this figure may indicate an increase in religiosity amidst the Palestinian population.

The latest polls continue to bode poorly for Palestinian President Mahmoud Abbas, who was perceived by respondents as a loathed and weak leader who needs to resign his post.

Two thirds of respondents answered that he should resign, and only 31% thought he should remain in office. Most Palestinians who believed that Abbas should resign are residents of the Gaza Strip—a factor indicative of disappointment over Abbas's lack of involvement in the ongoing humanitarian crisis in Gaza.

According to the survey, if the presidential elections were to be held today between Abbas and Ismail Haniyeh—both would have garnered 47%. If one were to add Marwan Barghouti as a third contender, he would receive a plurality of the vote (40%), followed by Haniyeh (33%), and Abbas would pull up the rear with only 26% of the vote.

Despite US President Donald Trump's vague statements regarding the two-state solution, a moderate rise has been noted over the last quarter among Palestinian supporters of the idea (47% versus 44% in the previous quarter), but half of Palestinians (51%) still oppose this solution.

Reality, however, increases Palestinian skepticism regarding the feasibility of a two-state solution. Sixty percent believe that this solution is not feasible due to construction in the settlements, and only 37% believe that the solution is actually applicable. But despite these figures, there is a moderate decrease in Palestinian support for the one-state solution offering equal rights to Jews and Arabs (a third vs. two thirds).

Thirty-four percent of respondents believe that negotiation is the most effective means of achieving a Palestinian state, while 37% believe that armed resistance is the answer.