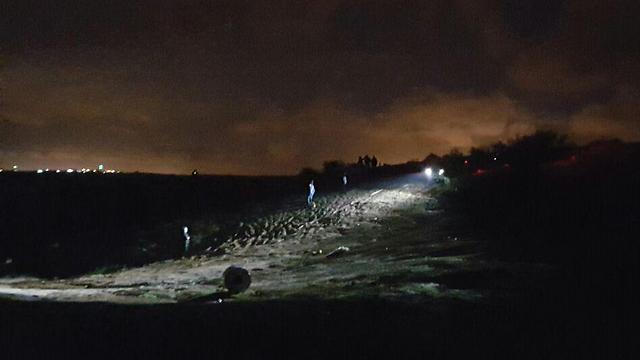 Controversial incident of the Umm al-Hiran shooting reenacted by police in an effort to establish circumstances leading to the death of a policeman and a Bedouin resident.

The Police Investigation Unit (PIU) began reenacting the Umm al-Hiran shooting Wednesday night in an effort to ascertain the circumstances of the incident on January 18 which led to Yaqoub Abu al-Qiyan being shot dead by police after he drove into 5 officers, killing Sgt. Erez Levi.

Investigators brought a vehicle similar to that of al-Qiyan's, using it during the reconstruction with its lights turned on—despite the fact that the initial testimony of the incident provided by the police claimed that al-Qiyan's headlights were off.

The reenactment was aided by a drone intended to provide the same vantage point as the video recordings of the incident. The decision to reconstruct how the incident transpired came after the PIU investigation concluded that the shooting of al-Qiyan was both premature and excessive.

An autopsy performed on al-Qiyan found that he suffered a bullet wound to his knee, causing him to involuntarily step on the gas pedal. According to some assessments, the bullet may have been what caused him to accelerate.

Photo: Roee Idan
Another detail revealed by the autopsy report is that another gunshot wound to al-Qiyan's chest caused massive bleeding that lasted for some 20-30 minutes. Investigators deduced, therefore, that al-Qiyan's life could possibly have been saved had medical teams been permitted to treat him sooner.

Investigators are still waiting for the ballistics test's results, which should shed more light on the incident.

Reenactment of the incident
X

Reenactment of the incident

Police Internal Affairs state that no officer involved in the incident was present for the reconstruction.

Immediately after the incident, police claimed that al-Qiyan had deliberately rammed his vehicles into the officers as they were surrounding Bedouin Umm al-Hiran ahead of the demolition of illegal homes built in the village. They later contended that he had been involved with the Islamic Movement.

In addition, Israel Police Commissioner Roni Alsheikh and the minister who oversees his force, Gilad Erdan, both publicly declared that this was absolutely a terrorist attack.

Not much time elapsed however, before his family and friends denied that he had driven with any malicious intent, or that he was in any way affiliated with the Islamic Movement.