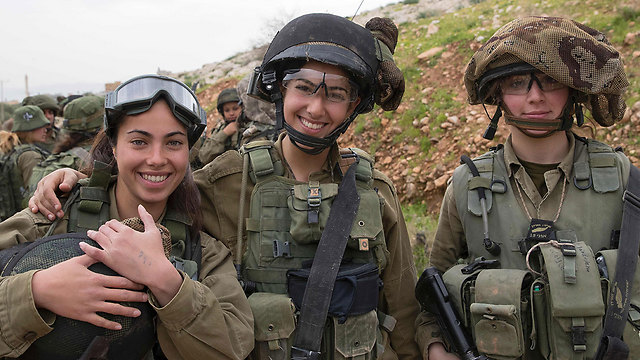 In a new position paper written in the wake of controversial comments by Rabbi Levinstein, rabbis associated with the more liberal stream countenance mixed office roles, but object to mixed combat duties.

Prominent rabbis affiliated with the Religious Zionist sector set out their conclusions in a new position paper on Wednesday evening stating that male and female conscripts cannot serve together in combat roles.

Unlike the head of the Bnei David pre-military yeshiva academy in Eli, Rabbi Yigal Levinstein, who ridiculed female combat soldiers and who represents the more stringent stream of the religious sector, the paper was authored by heads of yeshivas and educators who are associated with the more liberal strand in the Orthodox community.

Photo: AFP
The general stance taken by the rabbis however, contained no undertones of mockery, in contrast to the remarks made by Levinstein, and they even expressed their appreciation for all male and female soldiers guarding the security of the State of Israel. “There are a number of combat units in the army, including mixed units, in which we have yet to find a solution to how to implement the required separation. That’s why today it is not permissible to serve in them,” the conclusion stated.

Rabbi David Stav (Photo: Yossi Zleiger)
The position paper, which is aimed at people who are about to be conscripted into the IDF, bore the signature of, among others, Rabbi David Stav, who heads the Tzohar organization, Har Etzion Yeshiva head Rabbi Yaakov Medan, Efrat’s Rabbi Shlomo Riskin and Rabbi Ohad Taharlev, the head of the Lindenbaum Seminary in Jerusalem. The latter two are chief proponents of drafting religious women into the IDF and run a pre-military academy catered to their requirements. The rabbis also address in the paper the changes that began following the order regarding mixed service and determined that soldiers should object to being consigned to units in which they identify excessive mixing of women and men.

Rabbi Levinstein
Furthermore, they stated that they should not engage in activities that involve close physical contact betwen the sexs. They drew a distinction, however, between office jobs and combat jobs. “Mixed roles of male and female soldiers, which do not include physical activities or close contact is an inseparable part of modern life, both in the army and in civil life, and this is fitting and totally permissible” they wrote. The IDF was called on by the rabbis to show sensitivity for the religious sector and to enable its members to preserve their values and beliefs in order to prevent them from becoming a “ghetto” within the army.

The request was being made, they continued, out of a belief that “the IDF is a place for unity, not division. All tribes of Israeli society join the IDF and unite for the sake of the security of the State of Israel. We oppose any attempt to divide and tear the IDF, any harming of the respect for male and female soldiers in the IDF.”