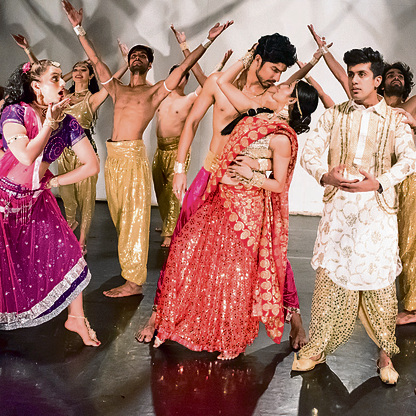 Bollywood making its way to Israel

A show titled The Road to Bollywood is set to perform in Israel this coming May; the show incorporates classic Indian cinema features with colorful costumes, song, and dance.

Twenty two dancers and actors and countless of colorful costumes are part of a show titled The Road to Bollywood performed by the Bollywood Show dance troupe. The troupe is set to perform in Israel in May.

The plot of the show follows traditional Indian cinema by combining themes of love, disappointment and hope: Sandeep, a kind-hearted, naïve man leaves the village of his youth to make it big in Mumbai.

There, he falls in love with the beautiful Laila, but she is already infatuated with Don, the mobster kingpin. And then things go awry; the thickening plot does not inhibit the singing and dancing, which remains faithful to traditional Indian cinema.

The choreography was done by Ashley Lobo from Mumbai, a leading choreographer in the Indian film industry over the past decade.

The dance moves are typically characterized by bold facial expressions and exaggerated hand moves, which are meant to convey passion and draw the spectators into the magical world of Bollywood.

The shows are scheduled on consecutive dates, starting May 17 in Jerusalem; the next day, at Omer; on the 19th, they will be performing in Tel Aviv, followed by a final show in Haifa.

Tickets can be purchased from Lean tickets. The prices range from 139 shekels to 359 shekels.