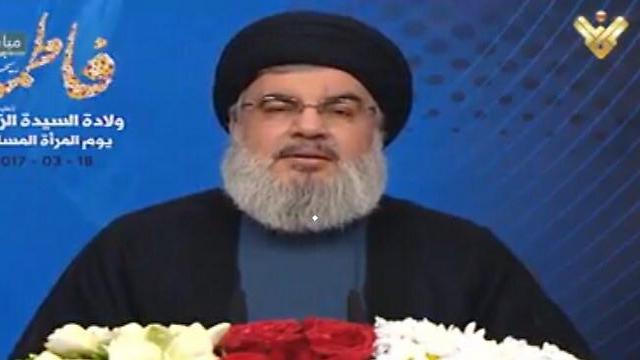 In an address to celebrate the birthday of Fatima, Hassan Nasrallah accuses the Jewish state of using myriad excuses to get involved in Syria, referring specifically to Thursday night’s attack on Hezbollah strategic targets in the war-torn country. He accuses Netanyahu of ‘crawling’ to ‘plead with Putin.’

Hassan Nasrallah, the leader of Hezbollah, commented on Saturday afternoon for the first time on the IDF strike on Hezbollah strategic targets in Syria on Thursday night, according to Arab media reports.

The remarks made by the secretary general of the Lebanese terrorist organization were broadcast on giant screens erected in several locations to mark the birthday of Fatima, the daughter of the Islamic prophet Mohammed. He said, “Israel is meddling in Syria every day under lots of excuses.” He mentioned Thursday’s attack among others. Hassan Nasrallah in his address on Saturday

Nasrallah added, “To all those who are fighting on the front in Syria for the enemy, I call on you and say that this plan has failed. Netanyahu crawled to Moscow to pleaded with Putin because he fears ISIS’s defeat, which is a failure for him and a victory for the Axis of Resistance.” Nasrallah was referring to a group of powers that includes Hamas, Hezbollah, Iran, Iraq, and Syria.

He also addressed the Syrian civil war, saying, “After six years of war in Syria, the countries and international forces that devised the plot against Syria are faced with the bloody reality, which is a disappointment and a failure.”

Nasrallah accused Arab countries of wasting billions of dollars on the war against the Syrian regime and the other axis powers that “could have saved Somalia and Yemen from hunger, built houses for the Palestinians in Gaza.” He further accused those countries of wasting hundreds of thousands of tons of ammunition and weapons in Syria and bringing thousands of militants from all over the world “to overthrow Syria and remove it from the Axis of Resistance.” Nasrallah returned to the subject of ISIS and projected that its military operations in Iraq will cease within a months. He also commented that its military presence in Syria's days were numbered. (Translated and edited by J. Herzog)