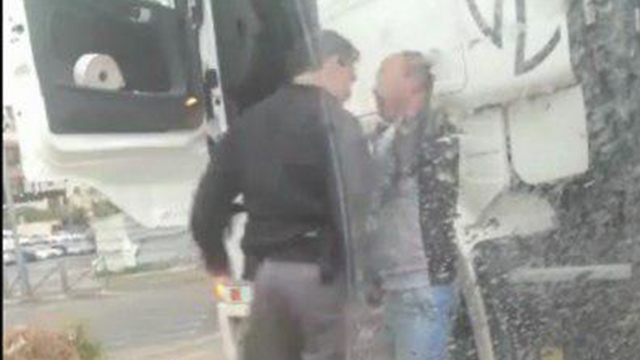 Officer seen in video swearing at the driver, headbutting and kicking him during a roadside argument; driver: 'He headbutted and kicked me. I think I suffer from fractures. My honor went down the drain'; cop suspended pending investigation.

A video of the incident shows the police officer yelling at the man, a truck driver, with the argument later escalating to physical violence.

The police officer is seen headbutting the driver, kicking him and swearing at him.
X

The argument finally ended when other police officers arrived at the scene and put a stop to the violence.

The argument broke out over a fender bender between the two on Tuesday afternoon when the truck driver, Mazen Shawiqi, hit the police officer's parked private vehicle.

"I got into my truck, his car was a bit in my way and I hit his bumper," Shawiqi recounted the accident. "No one came. I thought to myself, there are cameras here and everything is being filmed. When he tracks me down, I'll give him my insurance details. I really didn't leave a note because I thought there are cameras and it wasn't necessary."

Early on Thursday morning, the police officer tracked Shawiqi down and confronted him. "Today at 6am he came and told me 'You son of a bitch, get out of the car.' As soon as I got out of the truck, he started hitting me," the driver said.

The driver who was attacked, Mazen Shawiqi

"I asked him why he was acting that way. He said I caused damage to his car and ran away. I know there are cameras here, why would I run? I didn't kill anyone," Shawiqi continued.

"He headbutted me and kicked me. I got hit in the ribs and I think I suffer from fractures. I can barely speak. My honor went down the drain," the driver added.

Following the incident, the police officer was suspended, while the Police Investigation Unit launched a probe.

"This behavior is grave, abnormal and is not in line with the kind of behavior expected of police officers," the Israel Police said in a statement. "When we received the video, the police officer was immediately put on forced leave and will be summoned for a disciplinary hearing at a later stage. The Police Investigations Unit is examining the matter."

Public Security Minister Gilad Erdan praised the decision to suspend the officer, saying his behavior "was very grave and worthy of condemnation. This kind of behavior hurts the entire police force."

The incident led to outrage in east Jerusalem, where residents demanded the assaulting officer be arrested and fired. "It was outrageous treatment," one eyewitness said. "The police officer jumped on the driver for no reason. He beat him cruelly. Simply broke all the laws. I don't understand how such a criminal cop has a job. He needs to be kicked out of the force." MK Yousef Jabareen (Joint List) said the incident "is another evidence of police brutality and the racist, bullying treatment Arab residents suffer. I contacted the public security minister and I call for the immediate dismissal of the police officer.

"The cops in the field internalize the inciting messages they get from the political ranks, according to which Arab residents are second- or third-class residents, subjects without rights."