The assemblage of bottles
Photo: Clara Amit, courtesy of IAA 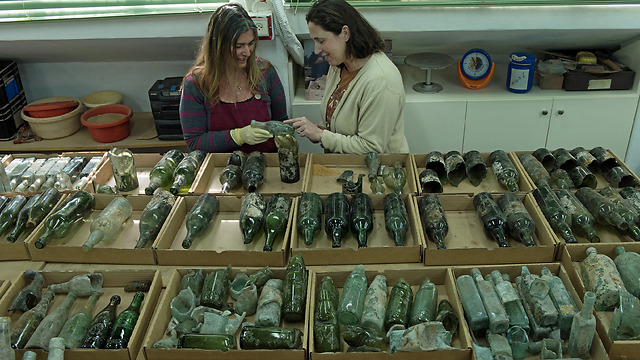 Hundreds of liquor bottles were discovered in excavations of the Israel Antiquities Authority prior to the construction of Highway 200 near Ramla; the bottles apparently belonged to British soldiers who were garrisoned in the are during World War I.

An unexpected discovery was made a few weeks ago in an archeological excavation of the Israel Antiquities Authority conducted in the vicinity of Ramla. Together with flint tools that are 250,000 years old from the Middle Paleolithic period, archaeologists were astounded to find a fascinating reminder from the First World War that included, among other things, hundreds of liquor bottles that are 100 years old. These were found near a building where British soldiers were garrisoned during the war. The excavation was carried out in the fields of Kibbutz Netzer Sereni, as part of the construction of Highway 200 that was initiated and financed by the Netivei Israel Company.
Hundreds of liquor bottles belonging to British soldiers from World War I found near Ramla
X

According to Ron Toueg, excavation director on behalf of the Israel Antiquities Authority, "The written historical evidence regarding the soldiers’ activities in the British army in Israel usually consists of “dry” details, such as the number of soldiers, direction of attack, and the results of the battle. The discovery of this site and the finds in it provide us with an opportunity for a glimpse of the unwritten part of history, and reconstruct for the first time the everyday life and leisure of the soldiers. We exposed a building whose upper part was not preserved, which was apparently the foundations of a barracks. This structure was used for agricultural purposes in the Ottoman period, and during World War I the British converted it for military use and soldiers were housed in it.

The assemblage of bottles that was revealed in the excavation (Photo: Clara Amit, courtesy of IAA)

Bottles and other artifacts discovered in the refuse pit. (Photo: Assaf Peretz, courtesy of IAA)
"Inside the building we discovered dozens of uniform buttons, belt buckles, parts of riding equipment, and other artifacts that were the property of the British soldiers. The building caught fire and collapsed for a reason which at this point is unclear. The place where the soldiers discarded debris was revealed just a few meters from the building. We were surprised to discover that along with broken crockery and cutlery there was an enormous number of soft drink and liquor bottles. In fact, about 70% of the waste that was discarded in the refuse pit were liquor bottles. It seems that the soldiers took advantage of the respite given them to release the tension by frequently drinking alcohol.”

Brigitte Ouahnouna, a researcher in the glass department of the Israel Antiquities Authority said, “This is the first time in the history of archeology in Israel in which an assemblage of hundreds of glass bottles from a British army camp from World War I was uncovered. Interestingly, the glass bottles, which contained mainly wine, beer, soda and alcoholic beverages such as gin, liqueur and whiskey, came from Europe to supply soldiers and officers in the camp. It is a fascinating testimony of the everyday life of the British military camp a century ago.”

A soda bottle with the manufacturer's name. (Photo: Assaf Peretz, courtesy of IAA)

An interesting item that was found in the excavation with the help of archeologist Shahar Crispin is the tip of a swagger stick that belonged to a Royal Flying Corps officer. Swagger sticks such as these were usually carried by senior officers as a symbol of authority. Its tip is made of silver and it is stamped with the symbol of the corps and the initials RFC. According to Assaf Peretz, a researcher of the period at the Israel Antiquities Authority, "To the best of my knowledge, this is the first item of its kind ever found in Israel."

The silver tip of the swagger stick that is stamped with the symbol of the corps and the initials RFC. (Photo: Ron Toueg, courtesy of IAA)

According to Sary Mark, an architect, conservator and an authority on the British army’s occupation of the area, “On November 15, 1917 the Egyptian Expeditionary Force under the command of General Allenby conquered the area around the towns of Lod and Ramla. Before occupying Jerusalem the army encamped in the area where the archeological excavation took place: the headquarters at Bir Salam—Ramla Camp and Sarafand Camp. The army was based there for about nine months until a decision was made to continue the conquest of the country further north. The building that was discovered in the excavation was used by the British soldiers, and it is rare authentic evidence and the first of its kind of the day-to-day life of the expeditionary forces for a very brief period during the First World War.”