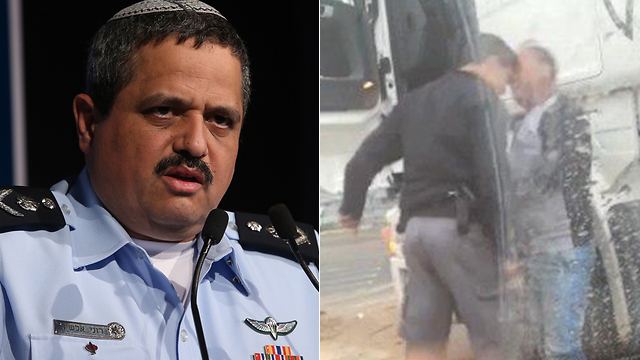 Assaulting policeman may be dismissed

The Israel Police officer who was filmed striking a truck driver is to be called in for an administrative hearing that may result in his termination, police chief announces.

The Israel Police officer who was documented physically assaulting a truck driver is being called for an administrative hearing and may be dismissed, the chief of police announced on Friday afternoon.

In a public letter addressed to the police force, Police Commissioner Roni Alsheikh wrote that, during the preliminary internal affairs investigation into the matter, the officer, a member of the riot police, was suspended from service.
The video of the attack
X

The video of the attack

The violent incident allegedly took place a few days after the east-Jerusalem driver damaged the policeman’s parked private vehicle and drove off. The officer tracked down the driver, Mazen Shawiqi, a few days later and initiated the confrontation. The policeman’s lawyer claimed, “The incident has no connection to his role as a police officer.” Alsheikh’s letter went on to explain that the command that oversees the offending officer has decided to call him in for a hearing before terminating his employment. He commented, “This is an irregular incident that has no place in the Israel Police, and unfortunately, it caused injustice to tens of thousands of police officers who work day and night for the personal security of the citizens of Israel and unjustly damages (their) public image.”

In the interim, the tricenarian officer was released on house arrest on Thursday. 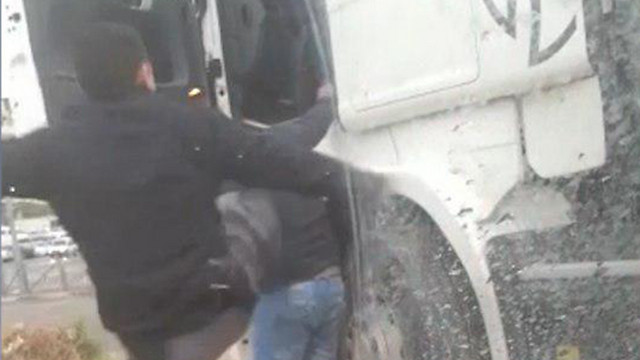 A still from the video of the attack
Four years ago, the same police officer was involved in another violent incident, the investigation of which was closed by the police’s internal affairs division.

A video of the incident shows the police officer yelling at the truck dirver, before headbutting the man, kicking him and swearing at him.

In what appears to be the aftermath of a collision between their vehicles, the police officer yells at the driver, "(Do you think that) I'm going to pay for this, you son of a bitch?" further accusing "Are you threatening me?"

"I'm not threatening anyone," the truck driver is heard responding to the police officer.

Several passersby tried to calm the police officer down, to no avail. "Get lost, all of you!" the officer is heard yelling at anyone who tried to interfere, swearing at them and threatening them as well.

The video shows the police officer also kicking another person who was on the scene.

The argument finally ended when other police officers arrived at the scene and put a stop to the violence.