May (L) and Netanyahu
Photo: AP 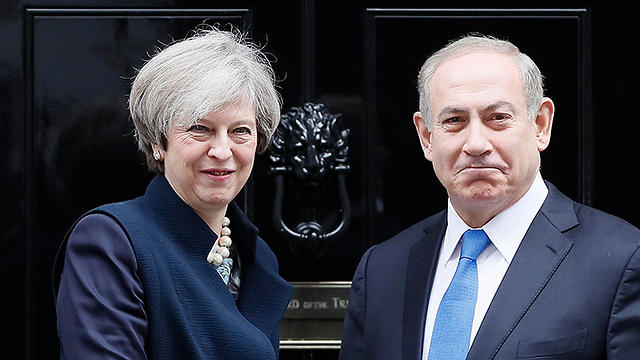 After The United Nations Human Rights Council adopts several anti-Israeli decisions on Friday, UK Mission to the United Nations states that while the UK is against the settlements, it warned the council to acknowledge an uptick in anti-Israeli terrorism and warned that if this attitude does not change, the UK will adopt a pro-Israel policy.

UK Mission to the United Nations issued a condemnation of the United Nations Human Rights Council's anti-Israeli policy, after the council approved on Friday a series of decisions critical of Israeli actions, and called on countries to sever ties with the settlements. Britain's condemnation warned that if the council's general attitude toward Israel does not improve, Britain will adopt a decidedly pro-Israel stance when it comes to its votes on the council.

"A just and lasting resolution that ends the occupation and delivers peace for both Israelis and Palestinians is long overdue," began the statement. "The UK shares the deep frustration of Human Rights Council members at the lack of progress in the Middle East Peace Process. The bleak picture painted in the discussions this week underlines the urgency of progress.

"However, the persistence of bias, particularly the disproportionate volume of resolutions against Israel, undermines the Council’s credibility as the globally focused and objective international human rights body we all want and need. The Council must adjudicate human rights impartially, without bias or favor, and demonstrate this in both the issues it prioritizes and the way in which they are dealt with."

The UK's statement continued to stress its traditional view in opposition to the settlements, while advocating for a two-state solution. That said, it made it a point to recognize Israel as the Jewish homeland while urging for the establishment of a Palestinian state.

"Today we have voted according to our principles and our long-standing policy on the Occupied Palestinian Territories. A just and lasting solution that helps end the occupation is long overdue. We stand shoulder-to-shoulder with the international community in the conviction that a two-state solution is the only sustainable path for delivering justice and human rights for both Israelis and Palestinians. We strongly encourage direct negotiations to realize the shared vision of Israel, the homeland of the Jewish people, standing alongside a sovereign Palestinian state, the homeland of the Palestinian people."

Theresa May speaking at the UN General Assembly (Photo: AFP)

Britain's statement called on the council to "recognize the continuing terrorism, incitement and violence that Israel faces. According to the Quartet’s report last year, there were 250 terrorist attacks, leading to the deaths of at least 30 Israelis. Renewed Hamas efforts to rebuild their tunnels are a grave concern. The scourge of anti-Semitic incitement and glorification of terrorism continue. And for as long as terrorists are treated as martyrs, peace will prove distant.

"Our enduring commitment to the universality of rights is also our source of enduring disappointment with the Council’s bias against Israel. Israel is a population of eight million in a world of seven billion. Yet since its foundation, the Human Rights Council has adopted 135 country-specific resolutions; 68 of which against Israel. Justice is blind and impartial. This selective focus on Israel is neither.

"Israel is the only country permanently on the Human Rights Council’s agenda. Indeed when the Council voted to include Israel as a permanent item in 2007—the so-called agenda Item 7—it was Ban Ki Moon who expressed his deep disappointment 'given the range and scope of allegations of human rights violations throughout the world.'

The UK also drew attention to a particular item that it had voted against earlier Friday—returning the Golan Heights to Syria.

"Nowhere is the disproportionate focus on Israel starker and more absurd than in the case of today’s resolution on the occupation of Syria’s Golan. Syria’s regime butchers and murders its people on a daily basis. But it is not Syria that is a permanent standing item on the Council’s agenda; it is Israel."

The UK's statement ended by saying that "Today we are putting the Human Rights Council on notice. If things do not change, in the future we will adopt a policy of voting against all resolutions concerning Israel’s conduct in the Occupied Syrian and Palestinian Territories."

British Prime Minister Theresa May has long been a stout supporter of Israel. The UK's latest UN statement is in line not only with May's evident pro-Israel stance but also US President Donald Trump, whose chosen UN Ambassador Nikki Haley recently criticized the "double standard" the UN has exhibited toward Israel.