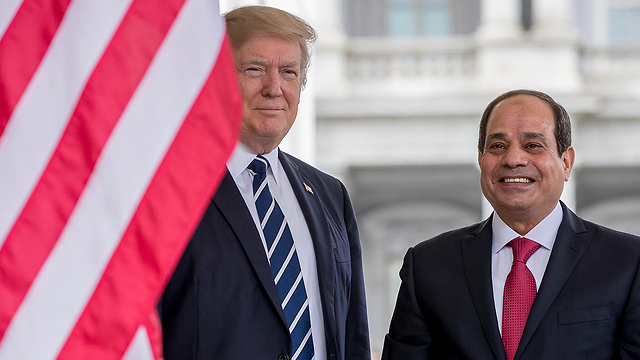 The US president welcomes Egypt's President Abdel-Fattah al-Sisi to the White House, making overtures of friendship that appear to signal the turning of a new leaf in the US's relationship with the leader of the Arab world; Al-Sisi extols Trump's ‘unique personality’, while the Egyptian ruler is praised for his 'fantastic job.'

President Donald Trump welcomed his Egyptian counterpart, President Abdel-Fattah al-Sisi, to the White House Monday for talks ranging from ways to collaborate in the fight against Islamic extremism to efforts to bolster Egypt's flailing economy.

In an Oval Office meeting, Trump said that al-Sisi has done a "fantastic job" and declared his support for Egypt and the Egyptian people. Trump noted that the US plans to build its military to "possibly" its highest levels as it looks to fight the Islamic State group and lend support to its allies.

The two leaders are also expected to discuss military and economic aid for the country.

Al-Sisi noted that he's had a deep appreciation for Trump's "unique personality" and vowed to work with the US to eradicate the "evil ideology" that is "terrorizing communities."

Trump has repeatedly mentioned Egypt as a critical Muslim-majority ally in the fight against extremists like the Islamic State group.

It's the second meeting for the pair. Reflecting on their first encounter in New York shortly before the general election, Trump said al-Sisi is someone "very close to me."

"Together, we will fight terrorism and other things and we're going to be friends for a very, very long time," the American leader said, citing a "great bond with the people of Egypt."

The White House welcome comes after a tense relationship between Egypt's leader and the previous administration.

Former President Barack Obama never invited Al-Sisi to the White House and allowed his administration to repeatedly admonish his government over its human rights record. Obama also briefly suspended some US military aid.