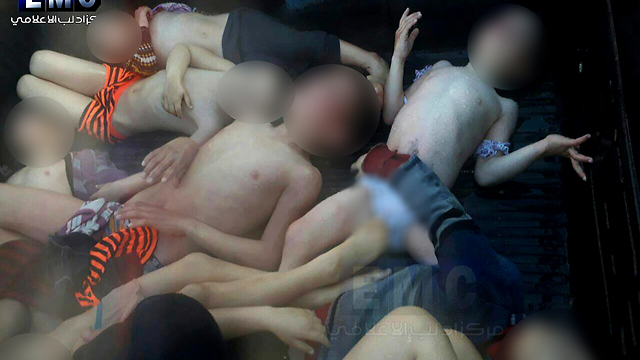 Benjamin Netanyahu ‘strongly condemns the use of chemical weapons in any situation.’ Education minister asks the prime minister to convene an immediate discussion on the matter, adding that Israel must reassess the security situation with the revelation that chemical weapons may be in use on the northern border.

Referring to the suspected gas attack in the northwestern Syria’s Idlib that day, Prime Minister Benjamin Netanyahu commented on Tuesday, “The pictures that come to us should shake every human being.”

The prime minister was speaking at the state memorial ceremony for Israel’s sixth president, Chaim Herzog.

Some of those killed in Idlib (Photo: AP)
According to medical sources in Idlib, at least 100 people were killed and another 400 were injured in attacks that apparently using Sarin gas. “The State of Israel strongly condemns the use of chemical weapons in any situation, especially on civilians and innocent children,” Netanyahu said. “I saw pictures of gape-mouthed and wide-eyed children who died from suffocation.”

Netanyahu called on the international community to fulfill its obligations from 2013 and complete the removal of chemical weapons from Syria. “If this is not done, there is no value to international commitments and treaties,” said the prime minister. “The brutal war raging near our borders has been going on for six years, and this war underscores the great imperative of the State of Israel to defend ourselves.”

According to reports in Syria, the use of poison gas was used in the morning bombing of Khan Sheikhoun. Medical sources reported that the victims showed signs that strengthen the suspicion of a chemical attack, including fainting, suffocation and foaming at the mouth.

Education Minister Naftali Bennett (Bayit Yehudi) asked Netanyahu to convene an urgent discussion on the chemical, saying that the discussion should deal with the humanitarian aspect, the security impact on the region, the significance of the use of chemical weapons and the systematic genocide going on in Syria.

According to the minister, the attack on civilians using chemical weapons requires renewed security assessments by the Israeli Security Cabinet.