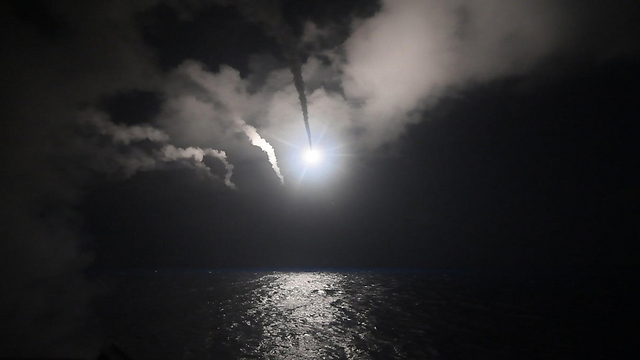 PM Benjamin Netanyahu hopes that the actions will resonate in Iran and North Korea; the IDF was informed before the strike took place; Homs governor claims Israel, US are divvying up duties in strike with other ‘terrorist organizations.’

Israel’s heads of government and state expressed their support on Friday for the American attack on a Syrian air base.

In a sharp escalation of the US military role in Syria, two US warships fired dozens of cruise missiles from the eastern Mediterranean Sea at the airbase controlled by President Bashar al-Assad’s forces in response to the poison gas attack in a rebel-held area on Tuesday, US officials said.

President Reuven Rivlin commented, “Against the terrible use of chemical weapons against innocent civilians, the clear and determined steps of the administration and the American army led by President Trump constitute an appropriate and suitable response to unthinkable brutality.

“Thus, the United States served as an example of the entire free world that is called to support any step required to bring the atrocities in Syria to an end.” Prime Minister Benjamin Netanyahu joined in the president’s sentiments. An official statement from his office announced, “In both word and action, President Trump sent a strong and clear message today that the use and spread of chemical weapons will not be tolerated.”

Reuven Rivlin (Photo: Motti Kimchi)
On his Twitter account, he wrote,” Israel fully supports President Trump’s decision. Israel hopes this resolve in face of the Assad regime’s horrific actions resonates not only in Damascus but in Tehran, Pyongyang & elsewhere.”

The IDF Spokesperson’s Unit said that the IDF had been briefed in advance on the American attack and expressed its support for the decision.

A source in the Saudi Foreign Ministry said that the kingdom fully supports US military operations against military targets in Syria in response to the regime’s use of chemical weapons against civilians.

The governor of Homs province told the Al-Mayadeen network that the American attack in Syria was part of the “division of duties” between the United States, Israel and those who support terrorism. “The attacks are intended to raise the morale of the terrorist organizations,” he said. He did not rule out the possibility that the American attack was carried out at the request of Saudi Arabia, Qatar and Turkey.