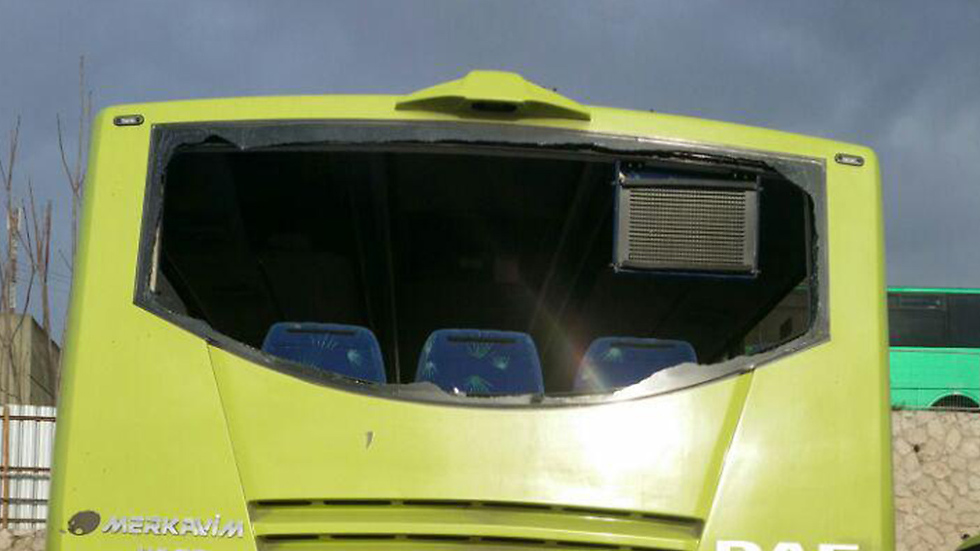 Bus drivers working in areas adjacent to Jerusalem are expressing growing concern over the threat of rocks being thrown at them, usually by Arab teens; the danger to them and their passengers is very real, as a loss of control could potentially lead to upwards of 50 people in a deadly accident.

Stoning of buses driving near Ma'ale Adumim and other towns close to Arab settlements in the Jerusalem area has become a major problem over the last few years, endangering both drivers and passengers.

"I've had rocks thrown at me six times already, and the last time, three months ago, they also threw a glass bottle filled with paint at my windshield," recounted D., one of the drivers.

"The bottle broke, and the paint smeared all over the glass. That was the most frightening incident of the all, though mainly because they (the assailants) were very close to me. "I'm a driver with a lot of experience (so I was fine), but if it had been a new driver, he could have lost control over the bus and crash. "I was very scared. But more than being scared for my own safety, I was scared for the safety of my passengers. Glass shards from the bottle flew into my eyes and I started bleeding, but I kept driving so as to not stop suddenly and endanger the passengers. "There were moments when I felt like I was about to lose control of the bus, and I thought that this might be the end of me."

D. stopped driving for an entire month after that incident. "I went to get my eyes checked by several doctors, so I can know for certain that I can return to work.

"I was staying at home and my mental state was bad. I started thinking that it's not worth it, but I had to go back to provide for my family.

"In the past, the police used to station patrol vehicles in those area for deterrence, but they don't anymore."

Assaf Bondi, Transport Branch Coordinator in Koach La Ovdim, a workers’ organization which represents the employees of Egged, the largest transit bus company in Israel, sent a letter to the company's management about the issue. In it, he wrote, "Over the last few weeks, several stoning incidents have occurred involving your company's buses in the areas near Jerusalem, especially near Ma'ale Adumim, where the drivers are working in vehicles which are not protected from firearms or from rocks. "All actions so far have failed to strengthen the drivers' sense of security. They are put in very real danger with no proper means of protection."

According to the workers’ organization, recently there have been four cases where rocks were thrown at a driving bus, in one of which the driver needed medical attention.

The organization also noted that workers of other bus companies in the area have also complained about stoning incidents.

Yaniv Zafrani, chairman of Egged's Workers' Union, said that the stoning of buses have become commonplace. "Our workers are driving from Ma'ale Adumim to Jerusalem and back. They pass near Wadi al-Joz and Isawiya (Arab neighborhoods). They get rocks thrown at them there for years now, but recently it has become more pronounced," stated Zafrani. "I personally know at least five drivers who experienced it, and it's starting to feel like the Wild West," he said, adding that "there's even a driver who used to drive with a helmet on. "We're afraid that a driver, God forbid, will get hit by a rock, lose control, and a full bus of 50 people will swerve and crash. It's scary." The government refused to address these cases, referring us to the police and Egged. Different branches of the police kept referring us to other branches, refusing to comment.

Egged responded that the company is "working with every means necessary to safeguard the physical and mental health of its drivers. We aim to reduce incidents of terror activities and the risk they impose.

"With that, the Workers' Union should understand that the mandate over the matter is not in our hands."