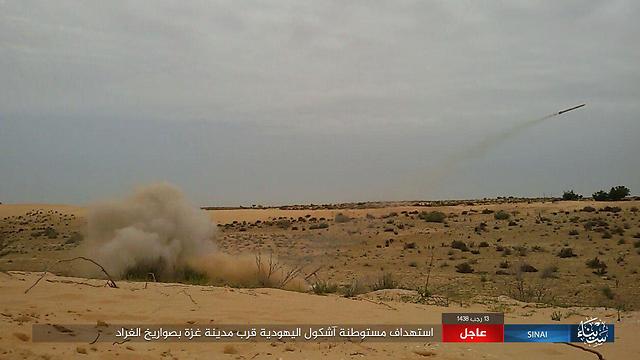 The report did not mention who the UAV belonged to and the IDF has refused to comment on the report.

In addition to Al Jazeera, local media outlets in the Sinai reported that an unidentified UAV fired two missiles at a structure and vehicle, killing and wounding civilians.

The reports come amid a period of unrest not only in the Sinai, but the rest of Egypt, prompting Egyptian President Abdel Fattah el-Sisi to declare a state of emergency. ISIS in the Sinai Penensula claimed responsibility for the attack, which struck a greenhouse in Israeli territory.

Remains of the rocket fired by ISIS (Photo: Roi Idan)

Hours prior to the attack, the Taba Crossing between Israel and Egypt had been closed in an unprecedented move, due to an alert for a possible terrorist attack in Israel, forcing thousands of Israelis who had planned to vacation on the peninsula during Passover to change their plans.

Minister of Intelligence Yisrael Katz’s office said that his decision was influenced by the severity and seriousness of the threat.

In a statement, the Counter-Terrorism Bureau said that Katz had taken the decision in consultation with Minister of Defense Avigdor Lieberman. Taking immediate effect, the crossing was shut down for those travelling to the Sinai Peninsula until the end of Passover on April 18, provided that the security situation improves.