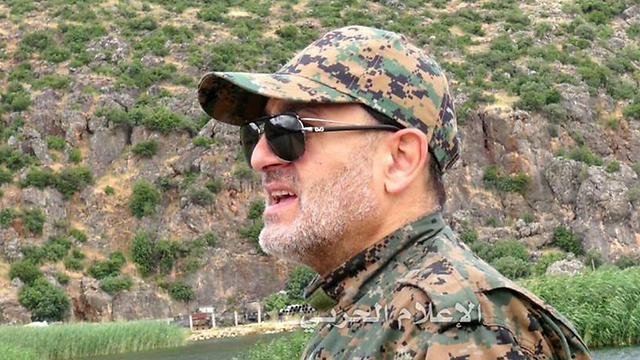 In its most recent attempt to debunk allegations of in-fighting, the terror group Hezbollah is warning against Facebook accounts allegedly used by Zionist intelligence agencies to collect information; among those accounts are the ones accusing them of killing one of their own commanders in an attempt to reassert Nasrallah's control.

The "Mouqawama" (Resistance) twitter account posted "there are Facebook accounts under multiple names aimed at collecting information for the Zionist enemy. Beware of these most prominent ones." Underneath the tweet were several pictures of Facebook accounts allegedly used by so-called Zionist intelligence agencies.

Mustafa Amine Badreddine
Among the most notable accounts are the ones opened as part of the “Your silence is an admission” anonymous online campaign, which sought to goad Hezbollah leaders into addressing the allegations that they were responsible for the assassination of the former commander Mustafa Amine Badreddine. The campaign's slogan has also appeared recently on a billboard in Lebanon. Intelligence researcher Ronen Solomon, owner of the Intel Times blog, told Ynet that "there is a possibility that someone managed to take control of the electronic signs and insert the slogan."

The billboard
Solomon also noted that underneath that sign was the logo for the Sabra Group, which operated out of Beirut. According to Solomon, the company is connected to the Sabra family, which is closely linked to Hezbollah. "One of the people involved in the murder of Rafik Hariri, the former Lebanese prime minister, was Assad Hassan Sabra. Badreddine was the main suspect of that murder," said Solomon. Meanwhile, IDF Chief of Staff Lt. Gen. Gadi Eisenkot has said that an internal organizational conflict led to the assassination, citing a report on the incident by the Al Arabiya network claiming that Hezbollah Secretary-General Hassan Nasrallah and Iranian Quds Force commander Maj. Gen. Qasem Soleimani gave the order.

From left to right: IDF Chief Gadi Eisenkot, Badreddine's alleged lover, Hezbollah leader Hassan Nasrallah (Photo: Yoav Dudkevitch)
The allegation gained even more merit recently when Badreddine's self-confessed former lover claimed that not only was Hezbollah behind his assassination, but that the he was aware of the group's plot.