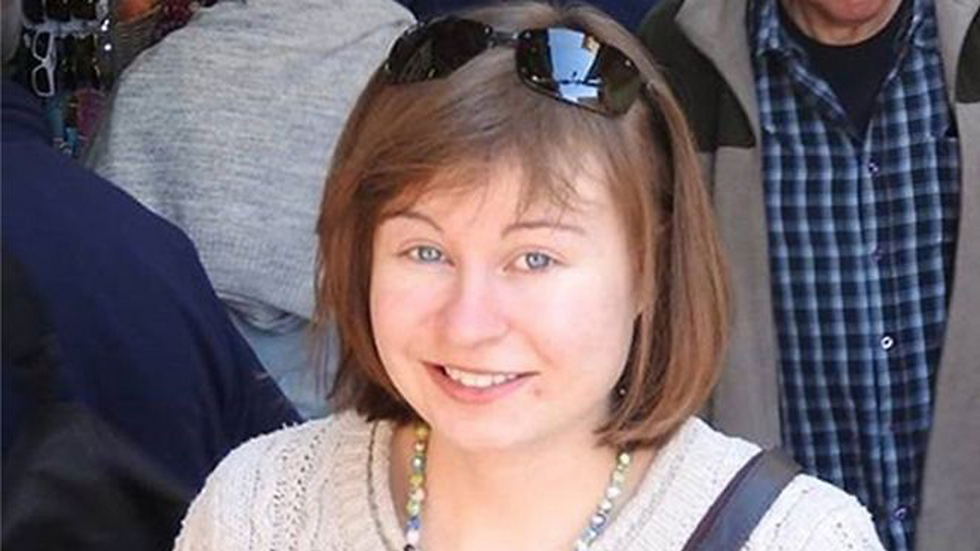 Condolences pour in for Hannah Bladon, the exchange student at Hebrew University who was stabbed to death on Good Friday in Jerusalem. Her family releases a statement remembering their ‘caring, sensitive and compassionate daughter,’ that also bemoans the pointlessness of her death.

The family of the 21-year-old exchange student who was stabbed to death in Jerusalem on Friday has released a statement announcing that they are “devastated by this senseless and tragic attack.”

Hannah Bladon, the religious-studies and archaeology student was studying at Hebrew University on a semester-long program from her home institution of Birmingham University. Whilst travelling on the busy light rail in the Israeli capital on the Jewish Passover and Christian Good Friday, Bladon was stabbed in the chest by a 57-year-old Palestinian man, Jamil Tamimi, who has a history of mental illness. Tamimi was arrested later that day.

Hannah Bladon
Her family released a statement via the British Foreign Office that spoke to the Christian student’s full life and promising future: “Hannah was the most caring, sensitive and compassionate daughter you could ever wish for. “She was a talented student and was studying at Birmingham University for a degree in Religion, Theology and Archaeology… She had been taking part in an archaeological dig that morning. “Hannah was a talented musician, part of a serving team at her local church and a member of her local archaeological group. She was an enthusiastic rugby player and a keen Derby County supporter. “She was driven and passionate and her death leaves so much promise unfulfilled.

Apprehending Bladon's attacker
“Our family are devastated by this senseless and tragic attack.”

Rona Evyasaf, an archaeology lecturer at Hebrew University, posted to Facebook on Friday, “A student of mine, Hannah Bladon, was murdered today in a terror attack here in Jerusalem. I did not know her well as we only had a few classes since the semester started. But at the little time we had, I found her to be very serious about her studies and very excited about archeology (she wanted to go on a dig before she goes back home). This is breaking my heart.”

The Israel Antiquities Authority commented on Saturday evening that it “sends its deepest condolences to the Bladon family over the murder of their daughter, Hanna, in the stabbing attack that occurred on the light rail line in Jerusalem.

“Hannah recently volunteered in the IAA excavation at Wilson's Arch in the Western Wall tunnels, and was supposed to return to the excavation after the holiday. May her memory be a blessing.”

Bladon’s hosting institution, the Hebrew University of Jerusalem, released a statement in which they noted that she had only arrived in the country in January. The university “extend our deepest condolences to her family, and we share in their sorrow. “The university condemns such acts of terror that harm innocent people, and especially a student who came to Jerusalem to study and widen her academic horizons… May her memory be blessed.”

The tramcar after the attack (Photo: EPA)
A statement released by Rothberg International School, the program within Hebrew University that ran Bladon’s program, added, “Her friends described her as an inquisitive and adventurous student who made the most of her opportunity to learn and experience life in Israel.”

Rothberg Vice Provost Jonathan Kaplan told Ynet, “Hannah came to Israel because of the Hebrew and also because of her interest in religious studies. Friends say that she was curious and very active and tried to take full advantage of her opportunity to study in Israel.” He spoke with Bladon’s parents on Friday evening.

A statement from the University of Birmingham read, “We are deeply saddened to hear about the death of our student Hannah Bladon… Our thoughts are with her family and friends during this tragic time, and we will be providing support for any student affected by this terrible event.”

The tram on which Bladon was attacked (Photo: Reuters)

Officials without a personal connection to Bladon also expressed their regret. Mark Regev, Israel’s ambassador to the United Kingdom, tweeted on Friday, “My thoughts are with the family and friends of UK student Hannah Bladon, who was murdered in a senseless act of terror in Jerusalem today.”

His counterpart, the British ambassador to Israel, David Quarrey, tweeted, “Our thoughts are with the family & friends of the young British national who died in such sad & tragic circumstances in Jerusalem today. Thank you Minister Yariv Levin, (the Israeli Ministry of Foreign Affairs) & many others in Israel for your messages of condolence on today’s terrible news.” Quarrey’s sentiments were echoed by other members of the diplomatic corps in Israel, including France’s ambassador Hélène Le Gal, the Norwegian embassy and EU delegation to Israel.

Attempts to save Bladon (Photo: AP)
Prime Minister Benjamin Netanyahu commented, “Radical Islamic terrorism strikes in capital cities across the world. Unfortunately, it struck today in the capital of Israel, Jerusalem…In the name of all the people of Israel, I offer my condolences to the family of the murdered girl. “Our security forces are fighting terrorism all the time, with all their strength, and they have thwarted a number of attacks in recent days. Our forces will continue to operate around the clock in order to protect the people of Israel.” President Reuven Rivlin said he was “filled with sadness” adding that Israel’s “thoughts and prayers are with the family of the victim.” He said, “This week thousands have come through the ancient gates of Jerusalem, to celebrate the feasts of Passover and Easter throughout the city—while the security forces work to ensure the safety of the dear residents and visitors to the city. “And so we will continue to do. Terror can never overcome us. Terror will never destroy our lives here.”