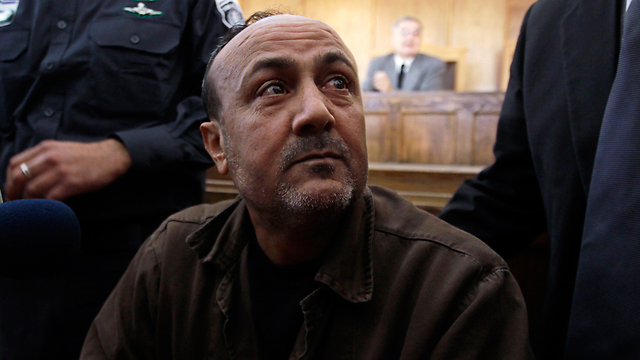 700 Palestinian prisoners serving time in Israel, from Fatah, the Popular Front for the Liberation of Palestine and Hamas state they will go on a hunger strike said to be led by Marwan Barghouti; A field hospital is being set up to prevent any evacuations to civilian hospitals.

700 Security prisoners belonging to Fatah, the Popular Front for the Liberation of Palestine and a small number of Hamas prisoners will begin a hunger strike on Sunday night, with Palestinian Prisoner Day falling on Monday. Earlier Sunday, Minister of Public Security, Strategic Affairs and Minister of Information Gilad Erdan (Likud) held an assessment conference call on the matter with the Israel Prison Service (IPS), the police, the Israel Defense Forces, the Shin Bet and the Health Ministry.

Convicted Palestinian terrorist and prisoner Marwan Barghouti is thought to be behind the strike, as well as the protest leading up to it. As part of said protest, the Palestinian prisoners are demanding that the Israel Prisons Service install public telephones in their wards, as they are installed in criminal prisoner wards.

Marwan Barghouti
The Palestinian prisoners direct their second demand at the Red Cross, requesting that they once again receive two visits of family members each month. This follows a change in policy from nine months ago, when the Red Cross reduced family visits to Palestinian prisoners from twice to once a month, apparently due to monetary issues (the Red Cross finances the buses that drive family members to the prisons, picking them up from the West Bank and Gaza Strip). The prisoners also demand that Israel not block any first or second-degree family members from visiting them. They also demand longer visitations, from 45 minutes to an hour and a half at a time, in addition to being allowed to take photographs with their families once every three months. Certain Fatah members have been critical of the strike, as some see it as a power play by Barghouti. In recent months, Barghouti has complained that he and his camp have been shut out of positions of power after the seventh Fatah convention, in which he won first place on the party's list. The prisoners who announced they will join the strike are mainly from Hadarim Prison, where Barghouti is serving his sentence. It is possible that the impact of the strike will be felt more in the West Bank than inside the prison, especially since it will begin on the night prior to Palestinian Prisoner's Day (April 17). The contacts between the prisoners and IPS have continued and are due to continue even after the strike begins. For Palestinian President Mahmoud Abbas, the strike's timing is problematic, since it precedes his upcoming meeting with US President Donald Trump in early May. The Palestinian leadership sitting in Ramallah has no interest to ignite the area at present, while they still have hope for the Trump government.

'The strike is motivated by internal Palestinian political motives'

In recent months, Minister Erdan has assessed how prepared all the relevant Israeli bodies are to such a strike. This included discussions with the IDF and the Ministry of Health over the use of medical services provided to the IPS, sp as to prevent the hunger strikers from being taken to civilian hospitals, as required by the Ministry of Health. As part of these preparations, Erdan ordered the establishment of a field hospital to provide a response to the hunger strikers.

Erdan also directed the IPS to carry out intensive searches in the coming days to prevent all illegal communications between prisoners staying in different prisons, in addition to carrying out prisoner transfers in accordance to the IPS's discretion. According to Erdan, "Barghouti's strike is motivated by internal Palestinian political motives and therefore includes unreasonable demands regarding prisoner conditions. I instructed the IPS to act in every possible way to contain the strike inside the prisons and the Israel Police to prepare to offer the IPS the necessary assistance under any scenario that may develop. "