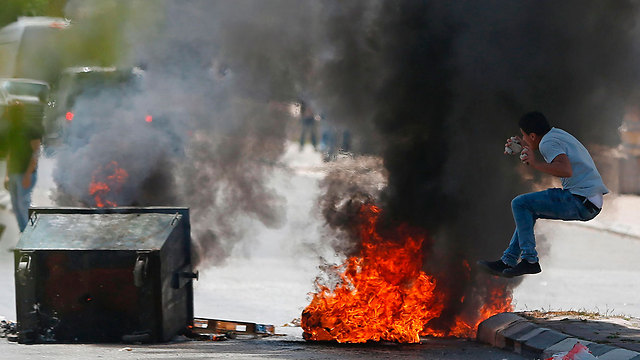 Speaking in an interview with Ynet, a former PA official says people identifying with prisoners and their struggles leads to public sympathy, which in turn, can lead to more demonstrations and confrontations with security forces.

With the hunger strike by Palestinian prisoners entering a second day, Ashraf al-Ajrami, former PA Minister of Prisoners Affairs, warned in an interview with Ynet that the strike could lead to violence on the ground.

"It can happen, because ultimately, we are talking about Fatah, which is the largest (movement) in the West Bank. When people identify with the prisoners it can cause more public sympathy which can lead to demonstrations and confrontations," said al-Ajrami.

Roughly 1,200 out of 6,500 Palestinian prisoners are taking part in the strike over the Israel Prison Service's (IPS) refusal to grant a series of demands made by the prisoners.

Dozens of striking prisoners have been transferred between wings and prisons in order to maintain order. Barghouti himself was moved from Hadarim Detention Center to the Kishon Detention Center.

According to al-Ajrami, "This strike is intended to improve living conditions of security prisoners, whether it is regarding a family visit, medical treatment, getting access to public phones, access to university studies and getting food as requested by maintaining a kitchen so that they make cook themselves. There are a lot of things they want to improve on their own terms."

On the question of whether the strike is a political move for Barghouti, al-Ajrami said, "Barghouti isn't the only one in public opinion polls in Palestinian society. All the prisoner organizations agreed to a strike before elections in Fatah. It was agreed upon in August of last year and I don't think it is related to that."

According to policy set down by Minister of Public Security Gilad Erdan, there will be no negotiations with prisoners. Furthermore, two years ago, a law allowing for force feeding of prisoners was approved—a possibility the IPS is prepared for.

However, according to al-Ajrami, the strike is liable to spell violence for Palestinian society. "When these demonstrations erupt into clashes with the IDF, I think that in the end Israel's security apparatuses will not be interested in getting into this situation. Now they will sit with the prisoners and negotiate and meet their demands.

"No one can rule out developments, even the most difficult ones on the ground," al-Ajrami continued. "It is the responsibility of the Israeli authorities to negotiate now with the prisoners and improve their conditions."

Israeli officials from across the political spectrum are weighing in on the strike and Marwan Barghouti himself.

Former Chief Commissioner of the IPS, Orit Adato, is of the opinion that Barghouti is attempting to use the strike as a political opportunity.

"The background is all clear to us and this is a political aspect of Barghouti's attempt to return to the forefront of his movement," said Adato.

Similarly, Yaron Blum, a former senior Shin Bet official, believes that Barghouti is attempting to acquire political capital for himself. "In recent days, he has been in conflict with Abbas and has called for the termination of intelligence cooperation and any other ties with Israel," Blum said.

"He has built a reputation of being far more extreme than Abbas and he is continuing his efforts to acquire political capital that may, in his dreams, lead to his release."

Even Prime Minister Benjamin Netanyahu joined the fray, wryly mocking Barghouti's characterization in the New York Times as a "Palestinian leader and parliamentarian," saying, "It's like calling Assad a pediatrician (sic)."

"These are murderers and terrorists and we will never lose our clarity because we are on the side of justice and morality. This moral clarity and the willingness to fight those who come to destroy us are our great strength," said Netanyahu.