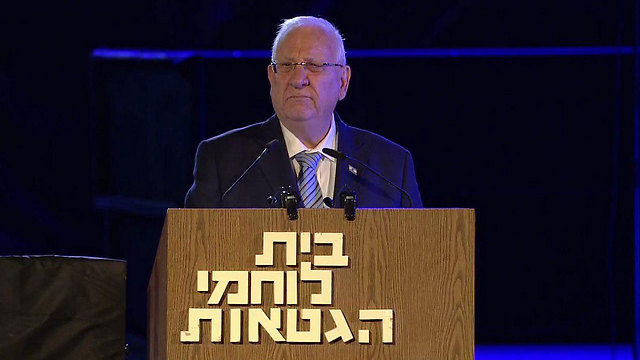 President Rivlin comes out against the French presidential candidate, who denied her country's responsibility in expelling Jews during WWII, adding that the new kind of Holocaust denial that Le Pen represents is 'Far more dangerous and destructive than what we have known so far.'

"Two weeks ago, a French presidential candidate denied France's responsibility for the deportation of its Jewish citizens to Nazi concentration and extermination camps, and denied the French involvement in the deportation of the Jews," he said during the closing ceremony for Holocaust Remembrance Day at Ghetto Fighters' Museum at Kibbutz Mordei HaGetaot.

"A member of her party denied not only French involvement in the deportation of the Jews to destruction, but their very murder," the president added.

Rivlin during the ceremony (Photo: MX1)

"In Poland, the discourse over the local population's involvement in the persecution and extermination of Jews has become a hot topic. Elected officials in Ukraine were furious after I spoke before their parliament and said that 'many of those who helped the Nazis were members of the Ukrainian people, including those who had ransacked and massacred the Jews and in many cases turned them over to the Germans.' And in Britain, a member of the Labour Party who was expelled from it said that 'Zionist Jews collaborated with Hitler,'" the president said.

"It is true that there is no equal responsibility," continued Rivlin. "We do not see any nation other than the German nation as the mastermind behind the diabolical design and execution of the final solution. But we demand self examination from of all those who helped carry out the extermination program."

Bringing his point home, Rivlin asserted that "Disavowing responsibility for the crimes committed during World War II Is a new kind of Holocaust denial, far more dangerous and destructive than what we have known so far. The traditional deniers of the Holocaust belonged to the extreme left and right sides and relied on the quasi-scientific work of so-called historians. Those older generation deniers attacked the facts and magnitude of the Holocaust, together with its goals and root anti-Semitism. Their success was minimal.

"Holocaust denial, however, which is growing before our eyes, strives for a more sophisticated and dangerous goal—is not the denial of the existence of the Holocaust but denial of the distinction between a victim and a criminal. It is a denial that seeks to turn all of Europe, from its national leadership to its organizing institutions, into the victims. It is a denial that wishes to abolish the political and moral responsibility that must stand at the heart of the memory of the Holocaust for generations to come.

"Victimhood is the most efficient and sweeping method that exempts from responsibility," he warned.

At the end of his remarks, President Rivlin invited his guest, outgoing President of Germany Joachim Gauck, to speak. Gauck thanked the president for his invitation to attend the moving event and said, "Before you stands a man, a German man, who has been moved by what he has seen today."

He continued, "Today, on Holocaust Remembrance Day, I pay my respects to those who were once ostracized, humiliated, persecuted and murdered by another Germany, because they were Jews. I will never think of those inhuman actions with anything but a pronounced sense of horror and profound sadness.

Gauck stressed the importance of educating the next generation of Germans about the history of the Holocaust, and noted the significance of the strong bilateral ties between Israel and Germany today. "When I was young, I and millions of other Germans began to read about and realize what Germans before us had done. There was a time when I was ashamed to be German. I was unable to like my country. I hated it even. My generation viewed our parents with disgust. They disclaimed all culpability, they allegedly knew nothing. The majority of them still maintained this silence in the 1950s and ’60s and refused to accept responsibility for what had happened. I am sure, Reuven, that we are both filled with joy to see that our people are so close today, not just in diplomatic statements, but also in real everyday life. And as a German who was born in 1940, I want to repeat that I am also filled with gratitude so great that I have no words to express it."

He noted that "I may have been the last German President to have been born during the war and during the Shoah. For me, personally, that is a significant fact. But for the German people’s historical awareness and sense of responsibility, year of birth is irrelevant. I have said it many times before. Even future generations of Germans will not have an identity unblemished by Auschwitz. The special and lasting connection between our peoples and Germany’s particular solidarity with the democratic State of Israel will remain part of their identity."

In his address at the opening of the ceremony, the chairman of the Ghetto Fighters’ House Museum Board of Directors, Dr. Arye Carmon, said that “It is our duty and it is the obligation of our youth, the people of tomorrow, to bear the burden of the fight against oblivion and denial. Already today, our lives have been exposed to the threat of the future of the Holocaust in the human consciousness. The signs of oblivion and denial arise hand in hand with renewed injury to human dignity and freedom, with renewed manifestations of anti-Semitism and with evil raising its head in those countries whose cooperation with the Nazi oppressor helped exterminate one third of our people."

Carmon stressed that the combined presence of Israel’s tenth president and the German Republic’s eleventh president, one of its most prominent leaders, is a sign for the launch of a combined struggle by those fighting for human dignity and freedom, a multi-generational struggle against oblivion and denial and the assimilation of the moral lessons of the Holocaust.

This year's remembrance day marks 72 years since the end of World War II and the Holocaust.