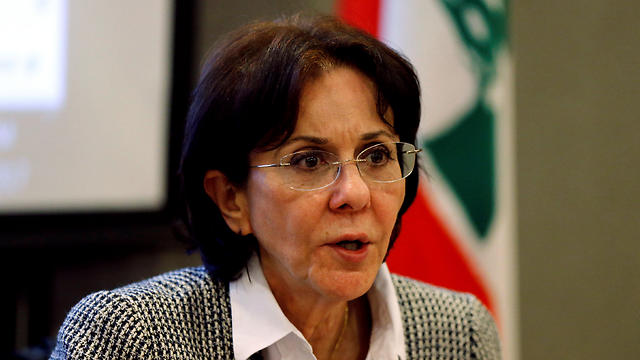 'Apartheid' furor on the rise against Israel

From UN reports sponsored by Arab countries to charges by international officials and personalities, Israel vehemently rejects the charges of 'apartheid' and points to the many freedoms and rights available to all citizens, including Arabs.

Labeling Israel's treatment of Palestinians as "apartheid" is like flinging a burning match into spilled gasoline—so combustible are the passions on both sides.

Rima Khalaf did just that when a report commissioned by her UN agency at the request of 18 Arab member states accused Israel of having established an apartheid regime designed to dominate the Palestinian people as a whole.

In a swift outcry, Israel slammed the 65-page document as anti-Semitic. The US demanded its removal and UN Secretary-General Antonio Guterres ordered it taken off the agency's website, saying it did not reflect his views.

Rather than comply, Khalaf resigned as head of ESCWA, a Beirut-based agency, one of several UN regional bodies dealing with economic and social issues.

More than a month later, Khalaf has no regrets. The report's charge of apartheid—a "crime against humanity" in the eyes of the International Criminal Court—deserves serious examination, she said in an interview.

"We are not here for defamation," Khalaf said. "We are here for solving the problem."

The former UN undersecretary general said the international community has failed the Palestinians and must sanction Israel if it wants to regain credibility.

Israeli government official Michael Oren disputed the apartheid charge as a "big lie," portraying the report as the latest attempt to "apply a completely unique standard to Israel which by definition is anti-Semitic."

Israel and its supporters are outraged at comparisons to apartheid-era South Africa, pointing to the many differences: Unlike disenfranchised blacks in segregated South Africa, Israel's Arab citizens, about 20 percent of the population, can vote, are represented in parliament and on the Supreme Court, and easily mingle with Jewish Israelis in daily life.

The report says apartheid is more than an exact replica of conditions in pre-1994 South Africa. It notes that international conventions and the ICC define it more broadly, as "inhumane acts" committed in the context of institutionalized and systematic oppression of one racial group by another, with the intention of maintaining that regime.

According to critics of Israeli policy, such expanded parameters could conceivably apply at least in some of the Israeli-controlled territories.

In the West Bank, military rule has sharply curtailed Palestinian movement, trade and access to resources, while Jewish settlers in the same territory enjoy full rights of Israeli citizens.

Jews and Arabs in the West Bank live under different legal systems, with Jews having far more protections.

A Palestinian state carved from the West Bank, Gaza Strip and east Jerusalem, captured by Israel in 1967, has been touted as the redress. But 50 years on, a partition deal appears distant, even as President Donald Trump says he'll try to broker one.

The report describes a "regime that dominates the Palestinian people as a whole" in complex ways that it says include a calculated fragmentation. Divided into groups—citizens in Israel, permanent residents in east Jerusalem, stateless occupied subjects elsewhere—Palestinians are prevented from effectively resisting Israeli control, it says.

But the report goes well beyond past warnings by some, including former US Secretary of State John Kerry, that an apartheid-like situation could emerge unless a two-state solution is reached.

It suggests that beyond the question of the occupied areas, Israel itself must eliminate laws that discriminate among Jewish and Arab citizens.

Israel "can be a Jewish state" provided all citizens enjoy equal rights, according to Khalaf, who is of Palestinian origin.

"If this is the case, then the label really doesn't matter," she said in the interview in Jordan, where she once held senior Cabinet posts and where she now lives again.

Detailing the most controversial charge of apartheid in Israel itself, the report argues that voting rights of Arab citizens lose significance because Israel's Basic Law bars any political parties that deny Israel's identity as both Jewish and democratic. This prevents Arab citizens from "challenging laws that perpetuate inequality," it said.

Arab politicians in Israel appear divided on the issue.

Some avoid using seemingly provocative terms like apartheid. They prefer to work within the system to try to alleviate what has been widely acknowledged as longstanding official discrimination, such as preferential state spending on Jewish communities.

Others, like parliament member Jamal Zahalka of the Joint List, an alliance of four Arab-dominated parties, say Israel has created a version of apartheid, including discriminatory rules on immigration and land use, even if it differs from the former South African system.

He noted that Jews from anywhere in the world can claim Israeli citizenship while Arab citizens are barred from bringing Palestinian spouses from the occupied territories to live with them in Israel.

Oren said fast-tracking Jewish immigration is a "correction to a terrible historic injustice of 2,000 years of statelessness for the Jewish people." He also argued Israel is one of many nation-states, and pointed to other countries with preferential immigration rules, such as Germany which repatriated large numbers of ethnic Germans.

"While we recognize the Palestinians as a people, endowed with the right of self-determination in what they regard as their homeland, that recognition is not reciprocated," Oren said, reflecting the widespread view in Israel that those making apartheid claims want to delegitimize and eliminate Israel as a Jewish state.

Many Israelis feel singled out because only their country has suffered the apartheid allegations so far, despite the fact that there are many cases of discrimination elsewhere, including in the Arab world.

So far, the ICC has not made such a charge, and evidence of racial discrimination is not sufficient to make the case.

"The broader question is whether taken as a whole the entire system constitutes apartheid," Bashi said. "It's a question that certainly has not been adjudicated, and we don't have judicial rulings from other parts of the world that would provide a clear answer."

UN chief Guterres hasn't discussed the substance of the report despite appeals by Khalaf. But in a recent speech to the World Jewish Congress, an umbrella group of Jewish communities, he suggested he was siding with some of the complaints, saying that "the state of Israel needs to be treated as any other state."

He stuck by his principles even when it required decisions that "create some uncomfortable situations," he said an apparent reference to ordering the report removed from the ESCWA website.

"As far as we are concerned, it was not published by ESCWA," said Guterres spokesman Stephane Dujarric.

Khalaf, who resigned two weeks before her scheduled retirement, believes Guterres was pressured by the US, Israel's strongest ally, at a time when the Trump administration is threatening to cut UN funding significantly. Dujarric declined comment.

Khalaf rejected allegations of bias by those who produced the report. One author is Richard Falk, a former Princeton University professor who published blistering critiques of Israeli policies in his former role as UN special rapporteur on Palestinian human rights.

She said she hopes the debate started by the report will continue.

"This is not a verdict by a court," she said. "It is a scholarly work. We want to make sure everyone has a chance to look at it and discuss it openly, because we want a solution."