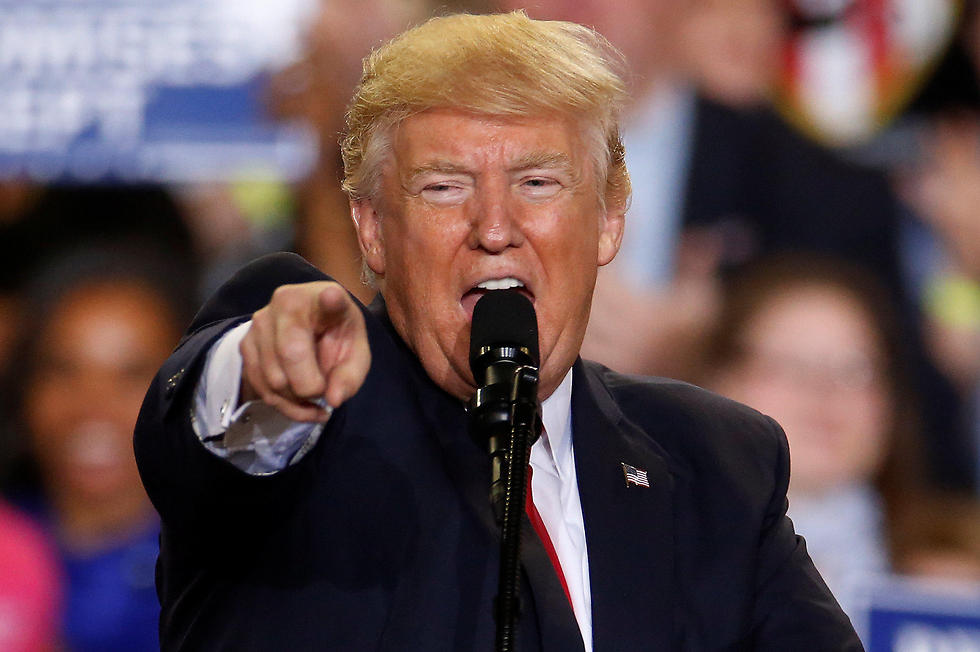 As he skips the annual White House correspondents' dinner, the US president calls the press 'incompetent, dishonest' while touting achievements at campaign-style rally in Pennsylvania: 'We are keeping one promise after another, and frankly the people are really happy about it.'

HARRISBURG - US President Donald Trump hit the road on Saturday to celebrate his first 100 days in the White House with cheering supporters at a campaign-style rally, touting his initial achievements and lashing out at critics.

Trump told a Pennsylvania crowd he was just getting started on meeting his campaign promises. He repeatedly attacked an "incompetent, dishonest" media, saying they were not telling the truth about his administration's accomplishments. "My administration has been delivering every single day for the great citizens of our country," Trump said in Harrisburg, Pennsylvania. "We are keeping one promise after another, and frankly the people are really happy about it."

Trump at the support rally in Pennsylvania (Photo: Reuters)

The rally occurred on the same day as a climate march at which thousands of protesters surrounded the White House, and it also coincided with the annual black-tie White House press dinner in Washington.

Trump and his staff chose to skip the press dinner because of what he said was unfair treatment by the press, making the first incumbent US president to bow out in 36 years.

Trump at the 100 days rally

"I could not possibly be more thrilled than to be more than 100 miles away from the Washington swamp," he told a crowd in Harrisburg, Pennsylvania, calling out The New York Times, CNN and MSNBC by name.

Trump at the support rally in Pennsylvania (Photo: AFP)

"A large group of Hollywood actors and Washington media are consoling each other in a hotel ballroom in our nation's capital right now," Trump said to loud boos from the crowd. "If the media's job is to be honest and to tell the truth, the media deserves a very, very big fat failing grade."

Trump listed what he said were some of his key early accomplishments, including the successful confirmation to the US Supreme Court of Justice Neil Gorsuch and clearing away many regulations on the environment and business.

Trump at the support rally in Pennsylvania (Photo: Reuters)
He also listed his approval of the Keystone XL and Dakota Access pipelines, killing a pending Asian trade pact, and enhanced security measures that have led to a sharp decline in illegal border crossings at the southern border. "The world is getting the message: if you try to illegally enter the United States, you will be caught, detained, deported or put in prison," Trump said. He shrugged off his failure to score major legislative victories on his core campaign promises, such as repeal and replacement of the Affordable Care Act and construction of a Mexican border wall. Trump's ban on visitors from some Muslim nations was blocked in court.

Trump at the support rally in Pennsylvania (Photo: Reuters)
He blamed Democrats for the legislative failures so far and said all of his promises would be kept eventually. "We'll build the wall, people, don't even worry about it," he said. Some supporters in the crowd said they were willing to give Trump more time.

"I voted for him and I'll give him a year. That's enough time to whip Congress into shape and get some deals done," said Michael Casciaro, 54, a civilian contractor for the military.

Trump support rally in Pennsylvania (Photo: AFP)
Trump said he reversed course on promises to name China a currency manipulator because he wanted its help in trying to rein in North Korea's nuclear and missile development. Trump has said all options are on the table if Pyongyang persists in its nuclear development. In an excerpt of an interview with Face the Nation of CBS, set to air on Sunday and Monday and conducted during the trip to Pennsylvania, Trump said he would "not be happy" if North Korea conducted a nuclear test. Asked if that would mean military action, Trump said "I don't know, I mean we'll see."

Reveling in the cheers in Harrisburg, Trump made reference again to his upset victory over Democrat Hillary Clinton in the crucial swing state of Pennsylvania, which he said "carried us to a big, beautiful win on Nov. 8."

In Washington, the usually celebrity-filled dinner hosted by the White House Correspondents' Association took a more sober turn, even as it pulled in top journalists and Washington insiders.

WHCA President Jeff Mason defended press freedom even as he acknowledged this year's dinner had a different feel, saying attempts to undermine the media was dangerous for democracy.

"We are not fake news, we are not failing news organizations and we are not the enemy of the American people," said Mason, a Reuters correspondent.

Instead of the typical roasts—presidents of both parties have delivered their own zingers for years—the event returned to its traditional roots of recognizing reporters' work and handing out student scholarships as famed journalists Bob Woodward and Carl Bernstein presented awards.

"That's not Donald Trump's style," NBC News' Andrea Mitchell told MSNBC, referring to the self-deprecating jokes presidents in the past have made despite tensions with the press.

Trump left Washington as another in a series of protests against his administration was winding up. Thousands of marchers made their way through Washington's streets during the People's Climate March, a protest against Trump's moves to roll back environmental regulations.

New York protest against Trump to mark 100 days in office (Photo: AFP)
Asked by reporters accompanying him to Pennsylvania what he had to say to the climate change protesters, Trump said: "Enjoy the day, enjoy the weather."

New York protest against Trump to mark 100 days in office (Photo: AFP)
After the rally, the White House said the president had signed two trade-related executive orders, one for top US officials to review all US trade pacts for potential abuses and another setting up an office in the White House to advise him on trade-related issues.